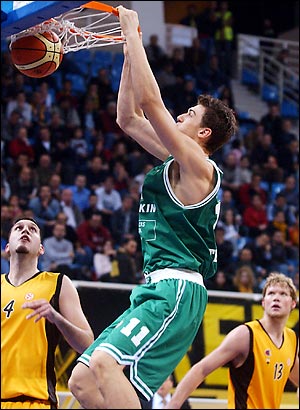 I thought this would be a blowout.

The Raptors used one of their best defensive performances of the season in a 91 to 84 win
and did it, with a little Magic of their own.

Andrea Bargnani was sensational scoring 23 points including going five for eight from beyond the arc. While Toronto shot 47 per cent from the field last night, their offense still left little to be desired at times and Bargnani bailed the Raptors out on a number of occasions.

While the Raptors lost what we termed a "must-win game" to Portland, Toronto got an even bigger win last night. Yes, Orlando was missing Jameer Nelson but that hardly equates to Toronto missing Chris Bosh and the Raptors in the end got the best of the Eastern Conference’s top squad. Toronto brought an energy level that fans hadn’t seen in quite a few games and were consistently trying to get in the passing lanes and force Orlando into taking tough shots.

The best example of this? Rasho Nesterovic on Dwight Howard.

In my preamble Monday discussing Toronto’s keys to this game, I mentioned a few things which I felt the Raptors needed to do to give themselves a chance, namely getting Rasho Nesterovic more involved.

Well how’s five blocks and 10 rebounds for involved? Rasho did as a good a job defensively on Dwight Howard as can be done forcing Dwight into tough looks at the bucket and making sure he really never got involved in the flow of the offense. In fact besides Carlos Arroyo, Toronto’s defence made sure that none of the Magic’s other players found their rhythm and incredibly the Raptors had eight blocks last night while the Magic didn’t register a single swat.

In addition, Toronto did a great job on the glass. While they were outrebounded, it was only by four and on numerous occasions Toronto had three players in the mix, fighting for control of a missed shot. This also allowed the Raptors to have a better control of the game.

The interesting thing was that Orlando should have won this game. The team got close on a couple of occasions, but for some reason decided to take a page out of the Raptors’ recent offensive playbook and continuously launched long-range jumpers or tried to go one-on-five in the game’s closing minutes. The Magic finished a hideous two for 12 from beyond the arc and I’m still flummoxed as to why Orlando coach Brian Hill decided to play the likes of JJ Redick (0 for 3 from the floor) and Travis Diener (2 for 11) late into crunch time. Sure Grant Hill was hardly effective in the first half, but he only played 19 minutes in this affair and for a team desperately seeking leadership down the stretch, getting Grant back in the mix seemed like a better option than either Redick or Diener.

While Bargnani had his best game of the season, my real MVP from Toronto’s win is perhaps coach Sam Mitchell. Mitchell did exactly what I was hoping he’d do in keeping Joey Graham in the starting lineup and limiting Fred Jones to only 11 minutes of action. Graham did get into foul trouble, but was aggressive in his 16 minutes of action getting to the line a team-high seven times and hitting all of them. Both he and Morris Peterson did exactly what this team needs as they combined for 13 of Toronto’s 26 free throw attempts, missing only one.

Mitchell also did an excellent job getting the matchups he wanted last night. Besides keeping Rasho on Dwight Howard, he also used Bargnani effectively on Darko Milicic and Anthony Parker (who had another well-rounded performance) on just about anyone including Arroyo in the second-half to keep his scoring in cheque.

With a red-hot Vince Carter and the Nets looming tomorrow night, this win was huge in giving Toronto a shot in the arm and stopping the proverbial bleeding. The Nets have been playing much better as of late but if Toronto can get this all-around performance from their club, they’ll definitely have a shot at usurping the Nets regardless of Chris Bosh’s status.