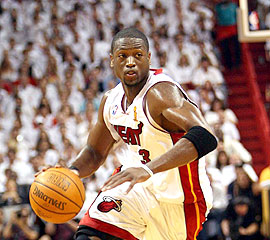 There's two stats I want to point out from last night's game, a dismal 99 to 77 loss to the Heat.

Four of 21 from beyond the arc.

Three of five from beyond the free-throw line.

Early in the season it became quite obvious that some people's vision of the Raptors becoming the "Phoenix Suns of the East" was fundamentally flawed. Yes Toronto had some quick point guards, able to penetrate and find open shooters...but unlike Phoenix, these "shooters" were hardly of the same calibre and were simply not hitting their shots.

So instead, Toronto started having success by working the ball in the half-court through Chris Bosh, allowing him to either exploit matchups or find open players for shots or cuts to the basket. But what about without Bosh...

Well, Raptors' fans have seen the "without Bosh" the past two games, both by far the worst performances offensively by Toronto all season.

I worried in pre-season that this club would struggle offensively at times because it lacked a number two scorer like Mike James, someone who could not only create off the dribble, but could also hit clutch shots. Toronto collectively is a better club this year because it's surrounded Bosh with complimentary players, but make no mistake, individually, the team isn't as talented.

Those numbers I alluded to at the start of this piece are the proverbial proof that lies in the pudding.

Without anyone who can get to the basket off the dribble and finish, Toronto's offence these past two games has been relegated to bombing away from the outside. The result? Yes, the 21 three-point attempts.

And the Raptors just aren't a good shooting team, hence the only four makes.

Look, Dwyane Wade is unreal. He blitzed Toronto's defence time and time again last night and showed just how valuable someone is who can beat players to the hoop and draw fouls. But really, take Wade off Miami and it's almost the same team as Toronto...they're just not that great minus Shaq and D-Wade. Like Toronto, they have some great complimentary players, but have few who can simply take control of a game individually. It wasn't like the Heat played lockdown defence, Toronto had plenty of open looks, but just didn't hit them. And until shooting coach Dave Hopla gets these guys to make their shots, or until Chris Bosh returns, we're going to see the same game each night.

With CV Smooth and Space Mountain James last year, even without Bosh, Toronto had two players who could both hit the long-range shot with consistency and score off the dribble to keep defences in check. While Jose Calderon has improved his shooting, neither he nor TJ Ford can be mistaken for James and without a player who can get to the rim, Toronto ends up with free throw numbers like last night... five attempts.

Really, that number says it all.

How do you draw fouls? Most of the time, it's by getting by a defender and to the basket. And yes, I realize we're beating a dead horse here but if you only shoot five foul shots all game, then obviously you're not making plays to draw contact and your offense is stuck on hoisting away from long-range.

The problem, looking at this lineup, is that Toronto really doesn't have the type of players who can consistenly draw fouls and get to the rim...and the few who maybe can, (see Joey Graham and Fred Jones) aren't getting it done on a consistent basis. Kudos to Sam Mitchell for looking to get these players involved thereby inserting Joey Graham into the starting lineup, but there's not much Mitchell can do when Joey then picks up two quick fouls and has to be subbed-out.

And Fred Jones? This is really the player who I thought would thrive in Toronto's system due to his ability to break an opponent down off the dribble and get to the rim. But we just haven't seen it. Interestingly, one of our HQ correspondents noticed that Mitchell appears to be playing Jones on the wrong wing and as a result, Jones doesn't appear to be comfortable attacking the basket. I've been trying to watch for this as of late, and yes, it's obvious that Jones is struggling, in particular with his ball handling. This season he's averaging almost as many turnovers as assists (1.33 to 2.0.)

The Portland game was terrible to watch yes. But I'd argue that this loss was worse as Toronto held its own on the boards to a solid rebounding club, yet really showed just how dependent they are on the jump shot. Even when the ball went into their bigs, Toronto fans were treated to some absolutely horrid offensive displays courtesy of the likes of Jorge Garbajosa and Kris Humphries. On one play, Humphries took the ball strong attempting to draw contact. Instead, he took a shot that missed iron completely and made me think "this is the same guy who averaged 25.7 points at Minnesota during his college days?" "Did he forget the fundamentals of shooting during that time span?"

Tomorrow night Toronto is going to have even more trouble at both ends of the court facing the Orlando Magic. Without Bosh, the Magic are a matchup nightmare for Toronto as the Magic have physical, athletic bigs (Dwight Howard and Darko Milicic) and quick, penetrating guards (Jameer Nelson and Carlos Arrroyo) to feed them the ball. For Toronto to even stay close in this game, the onus is going to fall on Sam Mitchell to get something going offensively and find a way to:

1) Get Joey Graham, Morris Peterson and Fred Jones more involved. There's not much Sam can do about foul trouble. But all three of these players are excellent free throw shooters and if Mitchell can find a way to consistently have them cutting to the rim, Toronto could gain a major advantage here. Seeing Joey Graham dunk on Alonzo Mourning last night did nothing more than prove to me that Toronto needs to see that style of game from Joey for a full 48 minutes. In fact, I think fouls aside, if I was Mitchell, I'd let Joey run wild. By starting him at either the 2 or 3, Graham will have an advantage strength and girth-wise on both Keyon Dooling or Grant Hill (the Magic's starting 2 and 3 recently) and running some iso's and post-ups for him might not be a bad idea.

2) Use Rasho Nesterovic more offensively. Rasho's no Hoffa. While he's also no Amare, he can be effective with his mid-range game. One of the ways Toronto stuck with Miami in the first quarter was by using Rasho as a scoring threat, forcing the Heat defense to collapse on him. Nesterovic is also a good passer so getting him more involved on the offensive end might help open lanes for the likes of Jones and Graham if not for uncontested jump shots.

3) Get better point guard play. Both TJ Ford and Jose Calderon have played poorly the past few games and Toronto really needs a shot in the arm from them. The two QB's have forced the issue to often and while TJ Ford was visibly frustrated last night (hence his T) he needs to stop going one-on-five offensively. When he received his technical foul, it was clear that he was not pushed, but just slipped on the floor. Unfortunately, if he had given up the ball during the same play (a two-on-one for the Raps) the whole situation might have been avoided. If Ford and Calderon can start getting into the teeth of the opposing defence and either draw the foul or find the open man, this would go a long way for the Raptors...

...at least until Bosh returns.