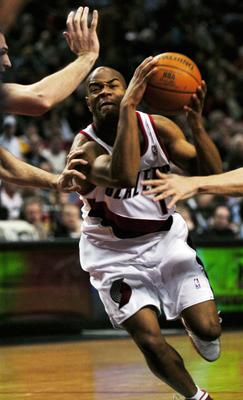 It was only a few days ago that I was writing about how the Raptors have stepped up on a number of occasions to a W in games I felt were of the "must-win" variety. The Sunday matinee against Portland, without their stud Mr. Randolph, was another one of those "must-wins." On paper it looked like the Raps could get this one at home as Portland is a young, inexperienced squad. Of course the game is not played on paper...and today was a great example of why. To make a long story short the Raps played with no energy, hustle or passion and ended losing a very winnable game 93-83.

Of course Portland was not the only team missing its best player. CB4 was in street clothes (and rocking a crazy nice watch) due to what is being described as a "bruised" knee. Bosh’s injury meant Andrea Bargnani’s first career start and a match-up with the player selected immediately after him - LaMarcus Aldridge. Unfortunately neither the number 1 nor the number 2 pick managed to do anything noteworthy and together they combined for 11 points and 7 boards. There was however one big difference between the two big men on this day...one of them had teammates that came to play while the other looked to be playing with guys who were recovering from a big night out on the town and figured a half-hearted effort would get it done.

When your best player goes down, other people need to step up and this simply did not happen for the Dinos. It was terribly frustrating game to watch and never at any point did it look like the Raps wanted to win this game, or for that matter even be in the game. The lack of effort did not go unnoticed either. The team was showered with boos on a number of occasions. Unfortunately the boos were well deserved as the Raps showed no life...evidenced by the disgusting rebounding differential....56-34. This is the same Portland team that Franchise was mentioning in his pre-game article yesterday that was in the basement of the league's rebounding categories!!

The other frustrating thing about the game is that the Blazers were giving the Raps every opportunity to get back into the game despite a higher shooting percentage and dominating the glass. The Blazers turned the ball over 17 times to the Raps' five and essentially did everything but hand the Raps a win. Nevertheless the Raps didn’t take advantage.

Effort was the single biggest reason why the Raps didn’t capitalize but it does not tell the whole story. The Raps were hopeless on the offensive end and settled for jump shot after jump shot and looked like a team in disarray. Time and time again the Raps would take ill-advised shots and for a team developing some solid chemistry, this was really surprising. It seemed like everyone on the floor wanted to be a hero which is never good. Instead of moving the ball and creating opportunities like the team had done so well as of late, there was a real lack of "team" play. Want evidence? Try only 16 assists to 29 field-goals.

Of course as frustrating as it was for us to watch it must have been almost unbearable for Sam Mitchell. Mitchell was searching for answers on this day trying to find some combination of guys that would pick-up the level of play and get the team rolling. Mitchell tried everything. He went with the bigs, then he went small...hell he tried everyone. Had Alex English volunteered I am sure he would have thrown him in. Despite the numerous line-ups and subs there were no answers to be found.

Here’s the thing that bothers me the most about the loss. Outside of Bosh isn’t there someone on this team who can get these guys fired-up and be a leader? For someone who was touted as a leader when he was brought here, TJ Ford showed very little in that department. In fact he and Fred Jones were culprits 1A and 1B when it came to poor shot selection and trying to be the "hero." Ford led the team with 19 field-goal attempts and at times you could have sworn that Mike James was out there! On a day like today, someone (and in my opinion as the starting PG that someone is TJ Ford), needs to get on his teammates and ensure that guys are playing the way they should. On the flip-side it is not only disappointing that there did not seem to be any leadership out there, but no-one looked like they wanted to use CB4's absence to their advantage. Guys like Joey Graham and Anthony Parker were non-existent and simply did not take advantage of the situation.

With upcoming road games against a solid Orlando squad and the Miami Heat it was important for this team to get its confidence up. Unfortunately for one of the first times this year the Raps couldn’t get the job done. These guys need to shake the cobwebs and really start focusing on playing like a team again. If Bosh is out for tonight’s game against the Magic and the Raps don’t play together as a unit they could be in for a long night. That leads us to the three keys:

1. Rebounding - If the Raps rebound like they did against the Blazers look for Dwight Howard and company to completely wipe the floor. Players like Rasho simply must play a whole lot better or Howard could end up with 45 boards on his own.

2. Shot Selection - Seem like a broken record much? Less jump shots, in particular when they are not in the "flow" of the game. Frankly these guys just are not good enough shooters to fire away blindly and Sam Mitchell and co. have to get some plays going to the basket regardless of the propensity of even Toronto's bigs to play on the perimeter.

3. Team Play - Toronto needs to go back to what made them successful. Move the ball. Drive and kick and create opportunities. Get to the foul line. Get in the passing lanes and out in transition. And maybe most importantly - stop settling for the long ball. Miami is not exactly a great offensive club (only averaging 92.9 points and shooting 43.75 per cent from the field) but then again neither was Portland and if Toronto can't play as a team and score in their offensive sets, it's not going to matter if Miami only puts up 85 points.

- Can anyone explain to me why Chuck thought the fact that the Blazers suspended Randolph for a game was unnecessary? And how funny was that replay of Randolph flipping the bird?

- A lot of nice young talent on that Blazers squad.

- Magloire is a shell of his former self at this point. He has too much weight on and won’t get the $10 million per that looked like a give-in 18 months ago.

- Here’s hoping Iverson gets moved out West, for the Raps sake.