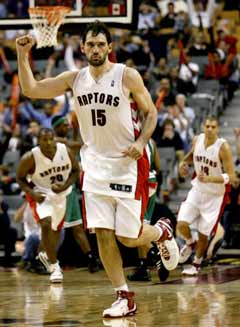 So far this season there have been three games that have told me that this team is headed in the right direction.

The first was November 22 against the Cavs. The Raps had just come off their 0-5 road swing out West and this team needed a victory on their home court. They won 95-87.

The second was three games later against the Hornets. The Raps badly needed to secure their first win on the road and the beat-up Hornets were ripe for the picking. The result was a Raps victory 94-77.

The third was last night’s match-up, the beginning of a back-to-back, (home/away) both games against Titanic Division rivals. Once the buzzer sounded the Raps had secured a "106-102 victory and in my opinion at this moment have gone 3 for 3 in "must win" games.

Now let’s not prepare for a parade. All they did was beat a 5-10 team, but what is important here is that they took advantage of an opportunity to jump-up in the standings. It’s wins like these that can keep a team in the hunt for the long haul, or knock them out of contention early. Although it seems like the season is still young, by this time next week the Raps will have played about a quarter of the season already. By winning these games now, in particular during the hardest part of their season schedule, the Raps are doing their best to ensure that they are still in contention when there is only one quarter of the season left to play.

Now in terms of last night's game there is a lot to talk about. The most obvious one from the opening tip was that Joey Graham got the start over Fred Jones. After the game Franchise and I got into a heated debate over this move. For those who have been with us since our inception, you know that Franchise and I often debate certain players and their roles. No one player has caused so much debate as Joey G and tonight was no different. After watching Graham play consistent ball over the past week or so, for the FIRST time in his young NBA career I might add, Graham looked to be settling into his new role and therefore I thought last night's lineup change was a terrible one.

Unlike many of the new Euro-Raps who don’t seem to let anything phase them (see Garbo who has exactly one facial expression, and ditto for Bargnani) Joey Graham is an emotional player. To be more specific, it is all about confidence with Joey G and over the past few weeks he has been brimming with it. I would argue one of the reasons for this new found confidence is a sense of comfort. A comfort of knowing his role, developing chemistry with his fellow bench boys in Bargnani and Calderon, and growing accustomed to the speed of the game. Fans, much like many in the organization itself I am sure, have been waiting for Graham to start becoming the player they had envisioned when he was drafted. Now, 16 months after that Draft in 2005, things look to be coming together.

Why then I ask you would you take him out of that comfort zone?

By inserting Graham into the starting line-up, Mitchell subjected him to three things, none of which were in #14's favour. The first was Paul Pierce. Although Graham has had reasonable success against some NBA swing-men as of late, Pierce has OWNED Graham since day one. There is no question Graham’s defense is improving but this one guy has lit him up since Graham first tried guarding him in pre-season of his rookie year. The result? Foul trouble (although it was enjoyable watching these guys go at it in the third Q) and no chance to continue his consistent and steadily improving play. The second obstacle for Graham was that he has no chemistry with the starters, hence less comfort. The third, is a sum of the first two points.

No consistency + no comfort = No confidence.

Therefore I don’t like the move. I am going to like the move even less if Graham starts the next game or two and then when Peterson comes back, Graham is asked to come off the bench again.

Joey however was not the only guy out there last night so let's discuss some of the key players for Toronto and give credit where credit is due.

Let's start with CB4. Bosh was clutch down the stretch of last night's game and we are now starting to see him really make this team his own. Late in the fourth Bosh DEMANDED the ball and delivered with a turn-around J. No extra dribbles, no getting pick-pocketed and no hesitation. That one play said so much about Bosh and his development and you have to love the fact that he is taking it upon himself to win a game. The thing that stands out the most to me is that I don’t think Ford had any choice BUT to give him the ball. Had Ford looked Bosh off, you know there would have been hell to pay. Bosh is now holding people accountable and is becoming the true leader. It feels like many moons have passed since people were wondering if this guy could lead a team.

Speaking of Ford, he gets a lot of credit for last night's win. With 10 points, 13 assists (2 turnovers), five boards and over 50 per cent shooting, Ford filled the box score and played within himself. Ford’s play was critical in helping the Raps get over the hump in the second quarter and he played very well in the fourth. Of course the issue here is that Ford is the starter, and the Raps came out flat to begin the game and to start the second half. Franchise recently suggested that T.J. Ford is the NBA’s version of Mike Vick. Tonight was a prime example of how true that statement is. Sometimes Ford seems a little helter-skelter, doesn’t seem to have a full grasp of his role and his position, and loses control over the game. Then all of a sudden he will make a few spectacular plays in a row and show flashes of brilliance. If you taped the game last night just watch Ford in the first Q as compared to the second - two totally different players. Here’s hoping as Ford matures as a player, he manages to develop some consistency...something his NFL counterpart has yet to do.

Oh and since I am comparing particular individuals...Fred Jones is doing his best Harry Houdini impression. If Jones continues to play like this when Mo Pete returns, he may find himself having a tough time getting minutes.

So now on to tonight's match against the Knicks.
What to expect? The Knicks are coming off a 108-100 loss on the road to the red-hot Pistons and they continue to be the brunt of every NBA joke. That being said Eddy Curry has started to put a few good games together, David Lee is becoming a force on the glass and Jamal Crawford loves to play the Raps. The keys to the game? Simple:

1. Transition D: The Knicks love to get out and run and they will be pushing the ball at all times. Sure this up-tempo style is something the Raps like to play themselves. but in order to secure a victory there has to be an emphasis on getting back. If the Raps transition D looks anything like it did last night against the Celts, then an L at the Garden is not out of the question.

2. Cleaning the Glass: Mitchell may have to use the big line-up two nights in a row as the Knicks have some moderately talented big bodies. As mentioned, Curry has played well as of late and is another player who seems to step it up against the Raps. Lee is a consistent double-double threat and gets on the offensive glass like no-body’s business, and highly questioned draft pick Renaldo Balkman is a hustle guy who can grab his share of boards. Again rebounding will need to be a team effort for the Raps.

3. Containing Jerome James: Hmmmm...ok not quite. But here’s the thing about the Knicks that is concerning. They have so many players that have the ability to "go off." Sure Marbury has had a rough season thus far, but against a smaller TJ Ford he could use his size and cause the Raps' D fits. What if Q starts hitting the three or Crawford get’s hot? If the Raps are looking to win two in a row and build momentum, they are going to have to show a lot of pride and hustle in containing the Knicks' multi-talented roster. Because as much as defense and rebounding is about positioning, its just as much about heart.