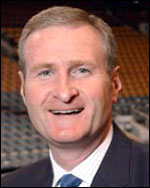 "Some games your starting pitcher might be having an off night...that's when you need your middle relievers to give you a strong enough performance so that your team hangs around until the closer comes in..."

Well last night when Mo Pete, Rasho Nesterovic, and TJ Ford at times, struggled, Joey Graham, Kris Humphries and Jose Calderon stepped up as the middle relievers, keeping the Raps in the game.

And then Chris Bosh played the role of the closer.

With less than 3 seconds on the shot clock and 6.1 seconds in the game, Chris Bosh, off a broken play, grabbed a loose ball, dribbled to the top of the three-point line and calmly raised up, draining a 3-pointer with Chris Webber's hand in his face.

And when Andre Iguodala's desperation 3-pointer missed its mark at the buzzer, the Raptors had knotted their season mark at 2-2 with a 106-104 victory over Philly.

While watching the final minutes of this game, I admittedly had flash-backs of last season. Oh...and the season before. Maybe another year, the story would have gone like this:

Raptors get close, but Bosh's shot doesn't drop and Philly closes out the game.

Or how about this one:

Bosh hits the shot, the crowd goes crazy, looks like the Raptors have this one in the bag. Only after fouling the 76ers at the other end, Philly pulls within 1 point after they make both free-throws and Toronto only makes one at the other end leaving the door open for a winning 3 from Philly...

...and of course Iguodala races down the court and with time winding down, hits the game-winning three-pointer all the while wrenching the hearts from the Raptors' collective.

However Toronto was out-rebounded 53 to 45 and out-scored in the paint. Philly's bigs put on a block party as well, sending back 12 shots. Toronto also allowed Philly to shoot almost 50 per cent while only shooting about 40 per cent themselves...and yet still won.

The difference? The aformentioned bench.

While none of their numbers individually will put them in the running for sixth man of the year awards, together, Toronto's bench outscored Philly's 47 to 30 and were the real reason Toronto stayed in this game long enough for Chris Bosh to win it.

Oh...and someone named Sam Mitchell. Mitchell's come under fire for his rotations already this young season but last night he did exactly what an NBA coach needs to do. He used the right players from those at his disposal at the right time. And he didn't hesitate to sit players who weren't performing up to par but also to go back to them for the final push.

Ford had a subpar game if you look at last night's contest as a whole, but his play in the final quarter was another reason the Raptors got the W. Sam Mitchell wants his team to push the ball and attack the rim and TJ simply did not do that enough in the first half of the game. Calderon however did when he replaced Ford and helped set the example for when Ford returned. The same could be said for Kris Humphries and Joey Graham. Both brought energy off the bench not to mention rebounding, scoring and even defense.

Yes, and Joey once again gave fans the type of match that he's teased us with
so often. I'll need to see many more like this to be convinced but it was definitely a step in the right direction. In fact it got to the point where Sam Mitchell was subbing Joey in for DEFENSIVE purposes at the end of the game! The Raptors really do have a bench that will be able to help grind out some wins this season and Joey Graham and others may prove to be the difference between a win and a loss on many an occasion.

I also think this speaks to something else. Granted it's still very early in the season but if you've been watching various other games lately you may notice something in the league this year.

Especially in the Eastern Conference, I really think that any team is going to be able to beat any other team on any given night. The Pistons just don't look like a contending team, I think the Cavs' supporting cast needs work, the Heat look tired and old, the Bulls need some time to gel and I don't trust New Jersey's health or bench. That's not to say that as the season progresses, some teams will emerge as somewhat dominant clubs, but I just don't think this year you can circle your schedule and say "oh good, Hawks are in town next." Or, "Bobcats this Friday, easy win." Even Portland who experts picked to be the worst team in the league has started at a respectable 3-2 while Phoenix is only 1-4!

With that in mind, I feel that Raptor fans are going to be treated to many a game like last night's tilt with the 76ers...close until the end until one team makes a key play or two down the stretch for the win.

The difference this year, is hopefully it's the Raptors making these plays.