Share All sharing options for: Media Watch for November 8, 2006/Game-Day Preview vs. 76ers 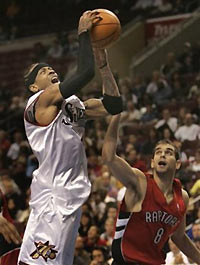 During this past summer's draft I was dismayed at what I felt was the Toronto Raptors' lack of an attempt to make a play for the free-falling Marcus Williams. Prior to the TJ Ford trade, the Raptors needed a floor general in the worst way and Williams of course ended up falling all the way to the New Jersey Nets at the 22nd spot in the draft. I couldn't understand why a push wasn't been made to get a late first round pick to snatch the former UConn product up!

However on the recent episode of RaptorsTV's "Behind the Draft," Raptors' GM Bryan Colangelo is shown working the phone like a madman in an attempt to acquire Mr. Laptop. A clip of it can be seen here...on You Tube...where else?

Admittedly this clip makes me giddy. Even though the Raptors were thwarted in their attempts to acquire Williams, obviously Colangelo saw something in Marcus that other GM's passed on and made his best attempt to obtain the young point guard. Furthermore, seeing Colangelo in action with a rolodex of GM relationships at his fingertips makes you feel just a bit more comfortable that he's in charge then say...oh...Rob Babcock.

Of course Babcock and Sam Mitchell weren't exactly reported to have the best working relationship but what about Colangelo and Mitchell? While it appears that the two get along extremely well, one has to wonder if this will continue to be the case if Mitchell continues to give Jose Calderon and Andrea Bargnani so few minutes. Bargnani has shown flashes but Calderon has played exceptionally well and may be better suited to lead the Raptors' attack if TJ Ford fails to use his speed and quickness with the first unit.

Ford will have his hands full tonight facing one of his former idols, Allen Iverson and TJ knows that he'll need to force AI into tough shots in order to give Toronto a chance to win.

In fact this will be one of tonight's keys to a Raptors' win. If Toronto can defend the perimeter against the likes of Iverson, Willie Green, Andre Iguodala and Rodney Carney, then much of Philly's offence will be negated. In addition, that would prevent outside bomber Kyle Korver from getting open looks as well.

Toronto's defence so far this season has been decent at times and an improvement over last year perimeter-wise...but still has a long way to go. You may remember that at the start of the pre-season, Mitchell and co. announced that they would be using a grading system this year to help instill a sense of accountability on that end of the court. How have the grades been doled out so far? Well it seems that the
newcomers have gotten the best marks so far which is no real surprise to this HQ correspondent.

In addition to preventing penetration and easy layups, another key for the Raptors tonight will be controlling the glass. Iverson and co. aren't afraid to shoot and Toronto must do a good job of rebounding the basketball and keeping the likes of Chris Webber, Samuel Dalembert and Steven Hunter boxed-out. Webber, although playing on creaky knees, is averaging 8.5 rebounds a game and keeping him away from loose balls will also neutralize his interior passing and scoring abilities.

Most importantly perhaps, rebounding the ball will be conducive to the Raptors' high-octane offense. A rebound in traffic could lead the Raptors to push the ball back the other way to take advantage of Philly's weak transition defense. The key to this will of course be how aggressive Toronto is tonight. Against San Antonio, TJ Ford and others allowed the Spurs to grind the pace of the game to a brisk walk and almost completely negated Toronto's offence. If the Raptors can push the ball like they did against the Bucks, then they should have Philly on its heals all night.

In fact, these next two games are big for the Raptors. Toronto so far on paper has basically lost to the teams it "should" lose to and won the game it had a shot at. Against Philly tonight and Atlanta on Friday, Toronto has a good chance to win both games and needs to get some confidence before embarking on a tough West Coast road trip. On top of this, both Philly and Atlanta are division rivals and Toronto needs to win these type of games if it wants any shot at making the post-season.