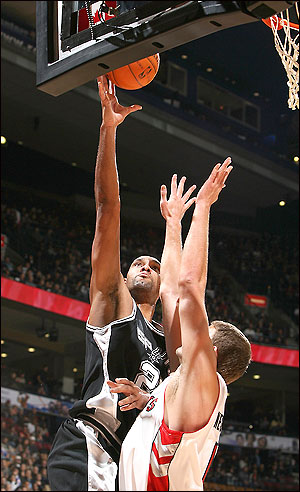 For the first Sunday matinee of the year there were a few story lines to watch as the San Antonio Spurs came to town. It was the return of the Red Rocket and Eric Williams, it was going to be the most international game of the year with 9 non-US born players seeing the floor and the Raps were coming off a great home win.

The end result? No Eric Williams, a bad Matt Bonner, some great play from the internationals, and 103-94 victory for the Spurs.

Early in the game the Raps looked solid and had their up-tempo style running on all cylinders as they managed to build an 11-point lead. The defense was solid and there was a clear game plan to get the ball out of Duncan’s hands with quick double teams. In fact, early on I was wondering, "Can the Spurs keep up?" The answer, unfortunately was yes.

Popovich yesterday displayed why he is considered to be one of the best coaches in the NBA. With the Raptors pushing the ball at every occasion, the coach called time-out and then changed the game. Right before the end of the first quarter there was an obvious change in the Spurs play, in particular on defense as there was suddenly a concerted effort to GET BACK. The Spurs in the last three quarters did one thing very well. They did everything they could to take high percentage shots, but more importantly if they missed, the guards (Parker and Ginobili) were almost always the first guys getting back to the other end of the court. This resulted in Toronto having to run their half-court offence, which as witnessed today, still needs some work. And speaking of the Raps’ half-court offence, it was glaringly obvious that the pick-and-roll is no longer going to be a very effective option for this team as when teams collapse on Bosh, which is almost inevitable, there is little organization and it seems like the team is scrambling to find a shot. Again full credit to Popovich who forced the Raps into this slower paced offence. Teams like the Suns, and others who employ the run-and-gun style, need to get this tape ASAP and watch what the Spurs did to slow the Raptors’ attack.

On top of ensuring the Raps had to run a half-court set, the Spurs also controlled the tempo by slowing things down and getting the ball into the Big Fundamental, Tim Duncan. They ran when the opportunity arose, but the Spurs know where their bread and butter resides and that is on the block. Duncan played extremely well today, in particular in the second half. One of the reasons that Duncan became more effective is that for whatever reason the Raps decided not to double team immediately like they did at the get go. It was frustrating today watching the Raps get away from their early game plan, which had been so effective. As the game progressed, the second defender was slower and slower to arrive allowing Duncan to take his time, put it on the floor if need be and essentially take control over the game.

That being said it wasn’t that the Raps were ever really out of the game per se, but you just never felt like they were going to get over the hump. Of course when you’re down to one of the league’s best teams it’s tough to mount that comeback The game was officially out of reach when Bosh looked to have secured a jump ball with Duncan under the Raptors’ hoop, however there was no whistle blown and as play continue, Fred Jones was called for a foul on a shot of Tim Duncan’s that it appeared he had clearly blocked. The Raps had built some momentum at that point but Duncan’s free-throws more or less sealed it.

It was a tough loss for Toronto but if there is one thing I take comfort in this early in the season is that this team has shown glimpses of being better defensively, especially on the perimeter. Sure Tony Parker was still quite effective but he had nowhere near the 30+ points he dropped on Toronto the last time these teams matched up and Anthony Parker rendered Manu Ginobili basically invisible. Now if someone had only run out on Brent Barry…

Hopefully as the season progresses the team will be able to focus on defense for a whole game rather than a few minutes here and there. Of course a few minutes of good defense is a few minutes more than was played last year.

- Calderon with 11 minutes? That is not nearly enough, especially considering TJ Ford’s lack of aggressiveness for most of the game. TJ also needs to stop slapping at every ball in sight and start playing defence with his feet instead of his hands.

- Obviously Bosh was awesome today. 17 rebounds? That is MONSTER.

- Bargnani showed flashes again. It’s going to take time, but it’s obvious he is going to be a player…there aren’t many other 7-footers who can run the court and catch the ball going to the hoop like him.