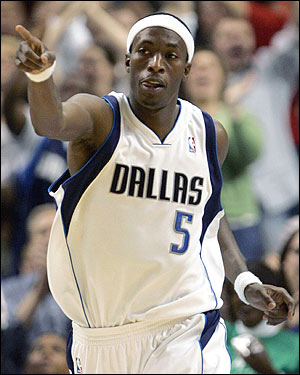 No Nowitzki, no problem.

And here's my final thought for a game (much like Toronto's two rough losses to Dallas last season) that I'm going to try and forget ever took place:

Without Chris Bosh tonight, Toronto wouldn't have gotten back into the game, and could have lost by 35. Bosh's attention to rebounding this year has been incredible and while his percentages are down, I'm not sure there's another player in the NBA who's more focussed on winning. While this must make things that much more frustrating for him at times based on Toronto's record, here's to hoping that his attitude rubs off on the rest of the club, in particular, Andrea Bargnani. While Bargs didn't put up huge numbers tonight, he still showed that even after a play such as getting badly rejected by Diop, he won't quit and stop looking for his shot. However both he and the other Raptors have to give Bosh some help on the glass on a regular basis. Toronto was outrebounded badly last night 48 to 35 which only served to give the Mavs' gunners more chances to score.

No, this team doesn't have the size of an Eric Dampier at its luxury but a commitment to rebounding from the entire club has to continue in order to be successful in this department. The Raps have the athletes to do it (calling Fred Jones, calling Fred Jones) and to beat a team like Dallas, this is just one of those areas in which Toronto needs to improve.

Dallas crushed Toronto last night and maybe this is a good thing.

Maybe now, the Raptors will have a better idea of how much they need to improve, regardless of the weak conference they reside in.

Yes, perhaps it wasn't only Nowitzki suffering from a case of blurred vision, but after last night's pasting, hopefully Toronto is seeing things at lot more clearly.