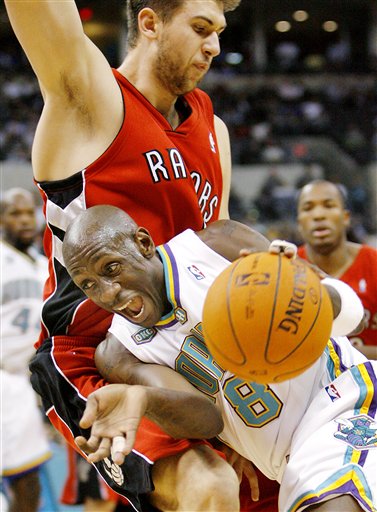 Andrea Bargnani scored a career-high 16 points in last night's 94 to 77 win over the Hornets, and put on an overall performance that was simply breath-taking at times.

In his first few games we really only saw the "catch and shoot" version of Il Mago. But in the past three games, fans have gotten to see many of the reasons why the Raptors' brain-trust made Bargnani the top pick in last summer's NBA draft. Andrea made some great passes (how about that laser touch pass to Bosh?), blocked shots, and scored the ball in almost every way possible.

On his first offensive possession, Bargnani surveyed the scene and then with a shooting-guardesque first step, blew by his defender with a hard drive to the basket. I had to look twice to make sure it actually was Andrea that had made the move! Then on his following possessions, we saw Bargnani head fake and sink the long-range jumper, hit the open three, post up deep in the paint and even get to the rim to draw the foul.

And after witnessing these attributes, you begin to see why Colangelo traded CV Smooth. Already, this HQ correspondent is seeing more potential in Bargnani's game than Villanueva's and a player who could possibly be a three-position threat, especially considering how fluid he looks for someone his size. I mean, to those of you who saw some of his baskets last night, ask your yourself if you've ever seen a 7-footer do these types of things offensively? No wonder many scouts were using the Dirk Nowitzki comparison because I've simply never seen someone that size drain shots off the dribble like this besides Dirk. Many of the things Bargnani was doing, even at times on the defensive end using his length, are simpy skills you can't teach which simply magnifies this kid's talent and oh, what the hell, upside.

However Bargnani wasn't the only story in last night's win, the first road win for Toronto this season and one that put a halt to their 14 game road losing streak dating back to March 21. Toronto got perhaps its best collective team effort of the young season with five players in double figures and significant contributions from Joey Graham, Jose Calderon, Rasho Nesterovic, Anthony Parker and of course, Chris Bosh.

In particular, the second unit of Graham, Calderon, and Bargnani continued their recent success as Toronto's bench scored 45 points, once again proving to be the difference. Graham finished with 14 points on six of 11 shooting and did a great job creating space by using his body. And with TJ Ford saddled with bunion issues, Calderon played his usual solid game, setting the pace and keeping the offence running efficiently.

I mean, talk about the Spanish Peyton Manning. Calderon just looks like a quarterback out there. His head's always up, he makes great decisions with the ball and is constantly chirping away, ready to change the offensive set depending on what his read of the defense is. In fact to this point, TJ Ford reminds me more of Michael Vick...spurts of flash and highlight-reel plays mixed with bouts of inconsistency and poor fundamentals not to mention both play at break-neck speed with reckless abandon. It's a real luxury to have both of these players and I don't think I could have been more wrong when I felt prior to the season that these two were too similar in playing style. So far we've seen the exact opposite and as long as both can stay healthy, this position looks to be in better shape than ever in franchise history.

The Raptors now take their slight swing of momentum into the big D tonight to face the Mavericks. Dallas is the hottest team in the NBA right now and Toronto will have their hands full for certain. However is the Raptors can play defensively like they did in last night's win, it's not impossible for them to steal a W. Sam Mitchell and co. take a lot of abuse for the defensive philosophies but they did a solid job last night. Without Peja and David West, the Raptors focussed on trapping Chris Paul and forcing him to take long-range jumpers and while he was the Hornets to scorer with 16, the team didn't get much offensively from anyone else and shot only 41.6 per cent from the field. Much of the praise for this defensive effort should go to Mitchell who had the Raptors play a solid zone defense for most of the game, forcing New Orleans/OK City's poor shooters to fire away from the perimeter.

Toronto also payed attention to our third game key as the Raptors outrebounded the Hornets last night, something I discussed with Ryan from hoopsaddict.com in greater detail last night on his Podcast. Bosh was a huge factor in this category grabbing 14 himself and had an amazing stretch in the third quarter when he grabbed offensive rebounds on three successive Raptors' offensive sets.

Toronto will need more of that glass-cleaning tonight as Dallas is one of the league's top rebounding clubs, especially on the offensive boards. Expect to see Rasho Nesterovic see plenty of minutes against the likes of Eric Dampier and co.

The final key to stealing a win tonight will be at the free-throw line. Dallas is only slightly better so far this season at getting to the line than Toronto but are the top shooting team percentage-wise in the league from the charity stripe. If Toronto wants to extend its road winning streak to two games it's going to have to keep the Mavs off the free-throw line while getting to the line a good deal themselves (ahem, that means you Fred Jones.)

No one's pulling any punches here, Dallas is again one of the top five teams in the league and will be tough to beat at home this evening. However if Toronto can do the small things and play decently on the defensive end, perhaps a win is within reach...especially if we see some more magic from Toronto's number seven.