Share All sharing options for: Media Watch for November 28, 2006/Game-Day Preview vs. Hornets 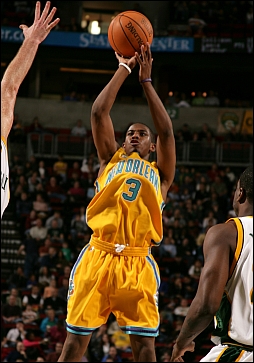 So we don't have the glitch fixed and we're still displaying Toronto's next game as being versus the Mavericks.

And yes, four games in five nights doesn't exactly bode well for the Raptors, especially considering how the team's played on the road, where their next two games will take place.

But here at the HQ, we're ready to rumble. Heck, only weeks ago we were still lamenting the absence of NBA basketball and Toronto already has three more wins than last year! In fact, the Raptors are sitting pretty at 4-9 and can really gain some ground through this next stretch.

Sitting pretty you say Franchise, how so?

Well, considering that the Atlantic Division leaders right now all only have one more win than the Raptors, and Toronto is playing two of their division rivals in the next few days, even at 4-9, Toronto could be in a lot worse shape.

Take for example the Western Conference. If Toronto (or the entire Atlantic Division for that matter) were in the West, none of them would be higher than second last place. And while Toronto has jumped five spots in ESPN.com's power rankings winning at least two of their next four would go a long way to increasing that jump and keeping Toronto in the playoff race.

Or crawl considering the division.

First up in the crawl, the New Orleans/OK City Hornets.

Toronto on paper is catching a break in tonight's match as the Hornets probably won't have Peja Stojakovic or David West in the lineup. This leaves sophomore sensation Chris Paul to lead the charge for New Orleans/OK City. While Paul is certainly one of the game's upcoming stars, he's still not a great shooter and neither are his teammates. In fact Toronto has a great chance to hold their third consecutive opponent to under 100 points as New Orleans/OK City enters tonight's game with the third worst scoring average in the league at 92.6 points per game and shooting only 42.9 per cent from the floor. If Toronto can display some degree of defensive intensity, similar to the one they displayed in their last win, then this would be a huge starting point for a win. New Orleans coach Byron Scott runs a similar offense to the one he used in New Jersey so expect the Raptors to face lots of back screens, backdoor cuts and various other plays to make use of Chris Paul's excellent penetrating and passing skills.

On the flipside, Toronto's going to need to score.

New Orleans/OK City is holding teams to under 93 points a game, third best in the NBA. They are also limiting opponents' field goal percentage to 43.5 per cent, both numbers that do not bode well for the Raptors, especially if Chris Bosh is not at 100 per cent. New Orleans/OK City boasts perhaps the best young crop of interior defenders in the league starting with rookies Hilton Armstrong and Cedric Simmons and ending with Marc Jackson and Tyson Chandler. While Ben Wallace hasn't worked out for the Bulls so far, Chandler has been his usual dominant rebounding self with his new club and all four of these players will present problems for a Toronto interior that already has trouble scoring points in the paint. Therefore it's even more important that with the Raptors' outside shots not falling, they make a concerted effort to get to the free-throw line and not attempt to force the issue on the road.

Speaking of shooting bricks, apparently the Raptors have hired Dave Hopla as a "basketball development consultant" to aid Sam Mitchell and his staff. In reality, Hopla, who has built a reputation as a shooting instructor, will be trying to help the Raptors take the lid off the basket, especially when the wing players are firing away from the perimeter. Hopla has actually worked with the Raptors before serving as a consultant during the 2004 training camp. Hopla states that "percentages don't lie" and hopefully he'll be able to re-inject some life into Toronto's perimeter game.

One player who seems to have been forgotten on the perimeter thanks to Joey Graham's recent success, is Morris Peterson. Apparently Peterson will not be in the lineup for tonight's game in Oklahoma City as he's still injured and while pundits are pointing out that it makes sense to put Mo on the trade block already, I still feel that giving him some of Fred Jones' minutes (until Jones can find the basket from beyond six feet) is a wise idea. Peterson was obviously not 100 per cent even prior to the formal announcement of his injury and I still feel that he's Toronto's best long-range threat once he gets his elbow issues straightened out (pardon the pun.)

So besides getting a good effort on the defensive end and running an efficient offense, are there any other keys for Toronto tonight? I believe the last big one will be rebounding. Toronto will have to do a number on the glass as collectively the Hornets are the third best rebounding team in the NBA at 44.4 per contest. Considering some of the forwards on the Hornets' roster this may go without saying but even the Hornets guards are excellent rebounders using their quickness and athleticsm. Desmond Mason, Chris Paul and Bobby Jackson all average over four rebounds a game and the Raptors need to corral any loose balls to prevent the Hornets from getting out on the fast break.

As a final sidenote, it will be interesting to see what Sam Mitchell's rotations are like tonight. New Orleans is similar to Indiana in that they play both half-court and "get out and run" styles and struggle shooting from the field. Andrea Bargnani could see plenty of minutes once again, provided he stays out of foul trouble, and I expect to see Rasho inserted from time to time to help on the boards.