Share All sharing options for: Tip-In: Raps let Hawks Fly Away With Win 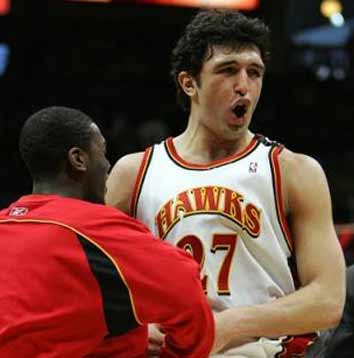 It doesn't get much more frustrating then that.

Toronto dropped a 97-93 decision to the Atlanta Hawks last night in a game that Toronto should have put away before the end of the first half. Joe Johnson led the Hawks with 27 points and Atlanta got timely baskets and plays from Tyronn Lue, Josh Smith and Zaza Pachulia to ensure the W.

I'm not even sure where to start in recapping this game to be honest.

TJ Ford was brilliant at times in the fourth quarter pouring in 19 points and making numerous key plays down the stretch to keep Toronto's hopes alive. However he also forced the issue on a few possessions forgetting that while he struggled last night, Chris Bosh should still be the go-to player in the crunch. In fact with Ford breaking down Atlanta's defence time and time again with penetrations, this should have been the case even moreso. And speaking of Bosh, how is his knee? Bosh has been Toronto's MVP by far and away this season but last night he just didn't look like himself. Bosh forced his offense at times and late in the game didn't even make an attempt to post-up! For this, some credit should be given to Atlanta's coaching staff who decided to double Bosh early forcing the ball out of his hands making CB4's teammates beat them. They didn't and Bosh himself just couldn't get it going for the rest of the game. In fact even his normally voracious dunk attempts were altered, especially in one instance when he was emphatically rejected at the rim by Josh Smith.

For those who didn't see this game, pat yourselves on the back. There was absolutely no excuse for Toronto to lose this game to a short-handed Hawks club and a look at the score sheet can attest to this.

Toronto shot 44 per cent from the field and allowed Atlanta to shoot 48.

Both teams went 6 of 17 from beyond the arc.

Both teams had 42 rebounds and 17 assists.

So you can see, this makes the loss even more frustrating.

Toronto essentially was nose-to-nose with the Hawks statistically and simply forgot about many of the little things they did right in Wednesday night's win like...

1) Get to the free throw line. Yes Toronto took 21 free throws. But of those 21, Toronto took only 11 through the first three quarters! Until the Raptors realize their advantage from the free-throw line, this is going to haunt the team all year. Toronto settled for too many jump shots once again, especially at key moments, and Toronto should have been able to get to the line at least 35 times last night which would have made the difference between a win and a loss.

2) Matchups rotation-wise. Sam Mitchell has to take some of the heat for this loss. He did a great job against the Cavs in terms of knowing when to move players in and out of the lineup depending on the situation. However riddle me this...If the idea to play Jose Calderon and TJ Ford together for a stretch of the fourth quarter was to use their quickness advantage to draw fouls, fine. Unfortunately neither player even attempted to draw a foul going hard to the basket during that time and instead, Atlanta used its size advantage to have Joe Johnson shoot over top of the undersized backcourt or penetrate for the hoop and the harm as Salim Stoudamire did on one occasion. And if that wasn't the point, what was it? Neither are great shooters and defensively they simply can't match up against Joe Johnson.

And unless Chris is struggling with his knee, Mitchell let Bosh sit for too long at the start of the fourth quarter and Toronto really had no offensive punch until TJ Ford took over. Yes, it's great to get Andrea Bargnani minutes...but when Jose Garbajosa is having his best game of the season offensively why are both he and Bosh sitting? Perhaps to really put things in perspective, it got to the point where even the usually cheerleading Chuck Swirsky stated "well...you can't leave Bosh out too long or you risk really getting put into a hole..." Now that's a sign if I've ever seen one.

3) Make game-winning plays. This is sort of my catch-all category. On Wednesday night Toronto executed for the most part down the stretch, grabbed key rebounds and made their foul shots etc. Last night, this was not the case as Toronto turned the ball over 16 times and simply made a number of plays that made me shake my head in disgust.

For example, on two straight occasions, Chris Bosh was guarding Josh Smith up so close that he probably could known for sure what Smith had eaten as a pre-game meal. This blew my mind! Smith is shooting an abysmal 37.5 per cent from the field and has never been even a good shooter! Why not back off him and force him take the jumper as he hadn't hit it all night! But no, Bosh did the exact opposite which resulted in two straight easy layups for Smith.

In the first quarter I was caught shaking my head again at Toronto's defence of screen and rolls. Joe Johnson was simply setting up shop behind Zaza Pachulia and bombing away as the Raptors' defenders were going under the screens for some reason! Yes, this comes down to communicating on D but in any event, with a shooter like Johson, who was on fire early in the game, why would you not automatically switch or at least try to fight through? Toronto, to their credit, fixed this after the half (where I'm sure Jim Todd tore a strip off of the team) but this is another example of easy points for the Hawks that could have been negated.

And even after Toronto missed what would be its final shot with about five seconds left, the team simply gave up and didn't foul! Sure, scoring five points in five seconds is highly unlikely, but this is the NBA where Ricky Davis once shot the ball at his own backboard so he could grab the rebound for a triple double! Anything can happen!

No, Toronto just didn't have what it took to snatch this win from the hands of defeat.

And with Indiana fresh off a solid win over Cleveland last night, Toronto is going to need to make these sort of plays to win tomorrow's tilt vs the Pacers.

The Pacers are one of the worst shooting teams in the league currently at 42.5 per cent from the field but are also one of the league's better defensive clubs. Currently they're holding opponents to under 45 per cent from the floor and 96.5 points, good for tenth in the league in that category. They're also a good rebounding team and if Bosh isn't at 100 per cent, he's going to have his hands full with the likes of Al Harrington, Jermaine O'Neal and Jeff Foster.

To grab a win tomorrow afternoon the Raps must do a good job on the glass and get some great guard play to offset any front-court issues. The team will also have to get back to doing things like getting to the free-throw line and taking care of the basketball.

And yes, we're begging here...but if Joey Graham can keep up his recent play against Indiana, perhaps watching Danny Granger won't be quite as painful for us here at the HQ.