Share All sharing options for: Tip-In: The Free Throw Advantage 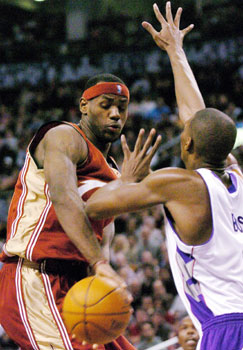 Earlier this season we mentioned that we felt that there was no one dominant team in the East and parity would be the name of the game.

After watching last night's game, from the fifth row none the less, we believe that even more.

The Raptors got the proverbial monkey off their back with a 95-87 win over the Cavs last night as coach Sam Mitchell went with his shortest bench of the season. Mitchell played only eight players as Rasho Nesterovic sat pinned to the bench...something we may see a lot of for the rest of this season.

As one of our readers put it, in a cruel twist of fate on Mo Pete action figure night, Peterson didn't play a minute and the NBA's resident ironman, who had played 371 straight games since Feb. 12, 2002, sat with an injured elbow. An MRI performed yesterday showed a slight tear and Peterson is listed as day to day.

And as the saying goes, one man's misfortune is another man's opportunity.

Joey Graham stepped into Peterson's spot and made the difference between the Raptors' third win of the season and their ninth loss. Graham was aggressive at both ends of the court scoring 16 points and grabbing eight rebounds including three offensive. Graham also spent a good portion of the game with the unenviable task of guarding Lebron James and did a fairly decent job.

James had a typical night at the office for him with 30 points, 10 rebounds and eight assists. But as we alluded to in our keys to the game, Toronto made Lebron's backcourt mates beat them and Eric Snow, David Wesley, Damon Jones and Daniel Gibson hit only 10 of their 31 attempts. Toronto also made Lebron himself work on each possession and early in the game he settled for too many outside three pointers helping Toronto jump out to a huge lead. Graham was a big part of this later in the game and Lebron looked increasingly annoyed at Joey G and you could see the trash-talk flying.

But the Raptors did more then just limit Lebron James in this match. Even with a huge advantage in front-court size, the Raptors were only outrebounded by five as Mitchell used Bosh on the Big Z allowing Garbo to match-up against Gooden. When Andrea Bargnani, who got significant minutes once again, came into the game, Bosh swung over to the power forward position. In fact, it was a pleasant surprise and a complete reversal to the Utah game, to see the Raps' front-court dictating how the Cavs played. Bosh managed to get Gooden in early foul trouble and Varejao was not far behind. Bargnani against Z was one of the best match-ups to watch as it was painfully obvious that Z wanted no part of leaving the key to defend the sweet shooting Italian. Incidentally, Bargnani is looking looser and looser with each game, and while he's going to struggle defensively and in the rebounding area due to his lack of strength and experience, last night he picked up not one, but two assists!

Our final point from yesterday's preview was that Toronto needed to hit its open shots. The Raps shot a very reasonable percentage from the floor tonight, although very little of this percentage came from beyond the arc where they continue to struggle (17.8 per cent.) The difference was that Toronto only took 17 three-pointers as opposed to 30-some attempts in recent matches. Toronto also seemed to make a concerted effort to get the ball into Chris Bosh early in the shot clock and let him go to work. In the first quarter this was effective but Anderson Varejao used his strength and defensive tenacity to bother CB4 in the second quarter and therefore Toronto's offence really was hot and cold at times.

However even when Toronto was struggling in their sets, one constant remained which helped them pull out this win.

Toronto shot 34 free throws making 28 of them while Cleveland only went to the line 12 times the entire game with Lebron James accounting for nine of these trips. Free throw shooting gave Toronto a chance to beat Utah in their previous game and we really see this as being the key to their season. The Raptors have good free throw shooters and quickness at various spots on the floor and under the NBA's new rules, there's no reason Toronto shouldn't be shooting 30 free throws a night. If they can do this, it will reduce the damage done by ineffective defence or problems rebounding the basketball. Sam Mitchell has got to raise the awareness of his troops to this fact as even though Toronto did get to the line with regularity last night, they still didn't take advantage enough. Both of Cleveland's bigs at the end of the game were playing with five fouls and the Raptors should have been taking the ball at them on every occasion. They did not do this and were lucky that Cleveland's shots simply did not fall at the other end.

Otherwise that second quarter run by the Cavs that erased Toronto's double-digit lead would have looked really bad.

On that note let’s make a quick observation about the 17 point swing that occured after the first quarter, as none of it was a result of Coach Mitchell. Had the Raps lost this game by tow or three there would have been an enormous collective cry from Raps' fans calling for a new bench boss, and because that didn’t happen Mitchell will duck the criticism for another day. However, we want to point out that even if Toronto had lost, the blame for blowing that 17 point lead lies SOLELY on the players. When a system is put into place and it works, as evidenced in the first quarter with good passing and a consistent effort to get to the hoop, it is on the players to continue to adhere to that philosophy. We are damn sure during a timeout that Mitchell did not look his guys in the face and say, "Ok, we are up by 17, let’s start jacking threes."

Now don’t mistake this for the HQ stamp of approval on Mitchell, rather it's pointing out that at some point the players need take responsibility and exhibit their collective basketball IQ.

Perhaps that was what was so satisfying about this win and something that bodes well for future contests.

Yes, Toronto gave up this 15 point advantage by the time the third quarter was a few minutes young, but even after letting Cleveland get back into the game and eventually take the lead, the Raptors kept fighting and eventually won out in the end.

-Mark Strong is now at Raptors Centre Court. Huh? Grasping for straws much?

-Even the guys in the "truck" have nicknames. The nickname thing is too much. I have a theory: If you don’t have a nickname Chuck doesn’t like you.

-Why do the Cavs seem to think that the Big Z has some sort of contagious skin eating hand disease? There really is no other excuse for his lack of touches.

-Lebron is downright scary. Not just as an offensive weapon but as a distributor. This Cavs team is overrated, especially without Larry Hughes, and Lebron just makes everyone's job that much easier. At times last night he looked like he was letting his teammates do too much...

-Interesting to see Calderon getting the majority of the minutes in the fourth quarter. Mitchell did a good job with his subsitutions tonight and the offence just seems to run smoother with Calderon leading the charge. His head is always up and he just seems to know where to find his teammates.