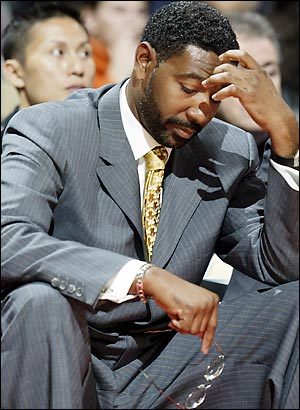 The Raptors are only 10 games into the season and already, the "fire Sam Mitchell" talk is in full swing and the local rags are churning out their thoughts.

Mr. Happy Dave Feschuk seems to be in a contract year with the Toronto Star considering how few negative articles he's written about the Raptors so far. And in today's piece he makes it clear that he feels the blame for Toronto's dismal record should fall on the players and not just Mitchell.

On the other side of the coin, Marty York. Why the Metro allows this individual to write for them is beyond me. He's yet to offer a credible and insightful piece of work to the public and his uninformed view points are laughable at best. Why then are we including it in the edition of Media Watch? Well, perhaps because of the fallout that may result from his latest offering.

In today's Metronews, York apparently has spoken to one of the current players on the Raptors (who of course wished to remain annonymous) who is advocating Mitchell's firing. The article is not yet online but will be later today here
or simply stop by any TTC station to pick up a copy. Among the alleged accusations leveled at Mitchell - he's too combative, isn't focussed enough on "on-the court issues," he doesn't know what he's doing and that the rest of the media in Toronto is scared of him.

Aaah, so this must explain why A CFL INSIDER like Marty York got the scoop! Yes, the same guy who tried to start up rumours of Vince Carter considering a return to Toronto...right...

But let's return our focus to the courts shall we?

Coming off what can only be described as a very disappointing road swing, the Raps return to the confines of the ACC tonight to face Lebron and his Cavaliers. This will be the second game in as many nights for the Cavs who are coming off a tightly contested battle with the Memphis Gizz. In their 97-94 victory the Cavs relied heavily on their front-court of Lebron, Drew Gooden and the Big Z, only getting 11 points, nine assists and one rebound out of their starting back-court of Eric Snow and David Wesley. On that note is there a worse starting back-court in the league right now? Both players are well beyond their prime (Wesley is 36 and Snow is 33) and neither of them are a threat on the offensive end. Eric Snow has the foot speed of a Commodore 64 and Wesley, known for being a "shooter," has not shot better than 43 per cent from the floor in six years (which is really only just shy of a third of his career.) With Larry Hughes on the shelf (seriously could his one healthy season have come at a better time?) Lebron is forced to carry an even heavier load than usual and now is responsible for not only bringing the ball up court and making plays for others, but also being the primary scoring option.

All this being said, it is not tough to guess what the first key of the game is for a Raps win.

1) Shut down Lebron and force guys like Wesley and Snow to beat you. This is obviously easier said than done and we all know you can’t stop Lebron...you can only hope to contain him. Parker and Peterson will have the primary defensive responsibility but I expect Mitchell to use the same game plan he used on Joe Johnson in the second half of the Hawks game - that being the constant double team. By doubling Lebron at every opportunity and forcing the ball from his hands, other players are forced to drain shots, and yes that includes Snow and Wesley. If I am the Raps, I like those odds better than letting James run wild.

Let’s not forget about the Cavs front-court however. Although not a cast of superstars, the Cavs front-court is far from soft and they have some big bodies including the aforementioned Gooden and Z, and to a lesser degree Marshall and Sideshow Varejao. It will be very interesting to see how Mitchell decides to use his roster to match-up against odd ball crowd. The primary defensive responsibilities will lie on Bosh (on Gooden) and Garbo/Nesterovic on Z. The centre match-up is one that definitely has my attention and how Mitchell deals with the Cavs 7'3" giant will greatly impact how the Raps fare. In fact this is my second key.

2) Can the Raptors deal with the Cavs front-court size advantage? Will Mitchell give Nesterovic a lot of burn? When Rasho was brought in, the party line was that he would play a key role against those teams with a true centre like the Cavs and Heat. Will Mitchell put the money where Colangelo’s mouth is? Or, now that the Raps have decided to start Garbajosa will the Raps try to force the Cavs to adjust? Z will have little interest in playing D outside the key and if Garbo can hit a few mid-range (let’s stick to what he is comfortable with at this point) it should open things up for Ford and Calderon to get to the hoop. Speaking of Garbo, he was rookie of the week in this past weeks NBA.com Rookie Report.

Of course opening things up for Ford and Calderon is only so good if the shots are not dropping which bring us to key number three:

3) Toronto needs to hit its open shots. Here’s where I think the Raps are going to run into trouble. Obviously the shots have not been falling as of late, but when your primary shooters like Peterson, Parker and Jones are chasing Lebron around all night you would have to think that this, combined with all the recent travel will equal heavy legs, and bad shooting. Bad shooting for this team almost guarantees a loss so if this theory holds true expect Sam to go deep into his bench once again and expect to see Graham on the floor and of course Bargnani (who according to early results on our latest poll should be getting more time).

This game is not a must win, but it is pretty damn close. Of course if they fail to pull this off, then the pressure will be truly on when they head to Atlanta for a re-match against the Hawks.