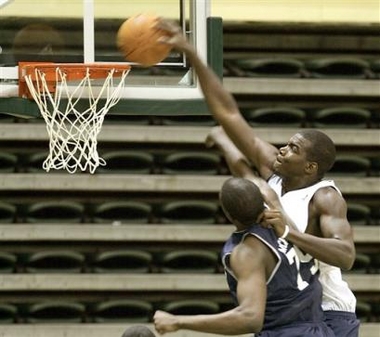 I expected a blowout.

But instead, Toronto gave Utah all that it could handle before crumbling in the fourth quarter and losing 101-96.

While the first quarter showed Toronto's usual first quarter shooting woes, the team stayed competitive thanks to their ability to get to the free-throw line and only trailed Utah by four points. Toronto then played the best second and third quarters of their young season outscoring the Jazz 52 to 42 all the while playing some excellent defense (by their standards) and eventually the Raptors took a commanding lead heading into the fourth quarter.

And then Jerry Sloan got mad.

Sloan saw that Toronto was using its speed and quickness to get in passing lanes and disrupt Utah's offence, all the while scoring easy fast-break buckets. Therefore he countered in the fourth quarter with Toronto's biggest nemesis - size. A lineup of Mehmet Okur, Carlos Boozer and Paul Millsap terrorized the Raptors on the boards and the constant pounding down low ground the game's tempo to a halt playing to the Jazz's favour. Millsap was the biggest thorn in Toronto's side with five offensive rebounds and numerous putbacks as he hit eight of his 10 shots from the floor and added two blocks to his totals. (As an aside, as a player we wanted Bryan Colangelo to take over PJ Tucker in the second round of last year's draft, this was a really excruciating thing to have to watch.)

And when Millsap wasn't grabbing boards and fighting in traffic, Okur was drawing Toronto's defence out to guard his three point attempts and Boozer was working his way inside using a wide assortment of offensive moves on his way to 35 points on an obscene 14 of 16 shooting!

The Raps simply didn't have an answer down low and Utah eventually took the lead.

The heartbreaking part of the loss however was that even with Utah's dominance inside, Toronto still had a chance to win. However the Raptors' inexperience shone through as TJ Ford made back-to-back rookie mistakes on plays - first, getting called for an offensive foul after charging into Deron Williams thus turning the ball over to Utah and second, even when Utah didn't score off the turnover, with 15 seconds still remaining, Ford made like Chris Childs launching an ill-advised three-pointer, missing badly.

And yet, Toronto still had one last gasp!

The Raptors corralled the long rebound off of Ford's miss but Fred Jones, yes, he of 41 per cent shooting, heaved one last desperation brick.

But it didn't matter. The moment Ford's shot missed, the game was done for the Raps. You could see it in their body language even as they grabbed the offensive rebound for one last attempt.

For the game, Toronto shot almost 42 per cent. Chris Bosh led the Raptors with 17 points and 11 rebounds but had an off night shooting, going only five of 14 from the floor. And based on the aforementioned field-goal percentage, his teammates didn't fare much better. When crunch time came, Toronto once again resorted to their puzzling habbit of launching perimeter shots. (Puzzling because the team has been shooting terribly from long range and knows it.) And everyone is to blame for this including Bosh who at times decided a fade-away would be much more effective than blowing by his defender as he had done all night. The Raptors attempted 37 free throws yesterday evening and I really feel that this is going to be a huge key to their season. This team is too quick to not regularly head to the free-throw line, especially at the power forward and point guard positions where they have a distinct advantage over many other teams. Toronto is simply too inconsistent a club in terms of its perimeter shooting to be settling for jumpers and to start winning some of these close matches, Toronto needs to continue getting to the free throw line...at least until the perimeter shots start dropping or they show they can make key defensive stops. (You can hear more of my thoughts on this topic on our recent podcast with Hoops Addict.com)

Lost in stats such as Utah's 51 to 36 rebounding advantage and some of Utah's individual performances was the play of Il Mago and Sam Mitchell's increasingly tightening rotation. Andrea Bargnani had his best game of the season with 15 points, three rebounds and two blocks and was instrumental in Toronto's third quarter run. Rasho Nesterovic was finally relegated to the bench for all but five minutes of the game (spelling Toront's bigs when they were in foul trouble) and essentially Mitchell played only eight players last night. The team looked much more cohesive with this lineup and here's to hoping that Mitchell sticks with it to avoid another Hoffa type playing time debacle.

Oh...and speaking of Hoffa? Utah might have won but the Brazilian Beast never saw the court against his former teammates.

Well...I guess I can take some solace in that.