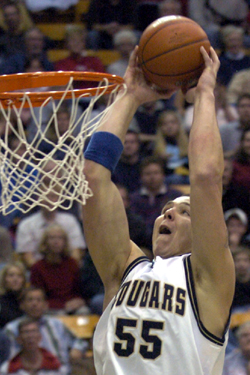 Tonight marks the end of a long and winding West-coast road trip for the Raptors as they face the Utah Jazz.

Can the Raps salvage something from this trip with a win?

Well...anything IS possible I suppose...but excuse me for being pessimistic. Utah is in first place in the league currently with a 9-1 record and currently sit atop of most websites' power rankings. Fluke? Utah did have a great start last season before fading down the stretch. However this team looks to be the real deal.

A solid returning core from last season, a healthy Carlos Boozer, a breakout season from point guard Deron Williams, and some great play from the Jazz draft picks have the Jazz running in peak form. They currently lead the league in scoring averaging 108.3 points per game, and in field goal percentage shooting 50 per cent. Utah is also one of the top free-throw shooting teams in terms of attempts and percentage.

Defensively their stats aren't quite top of the league, however, as long as Jerry Sloan is ruling things with an iron fist, defence will always be the Jazz's calling card.

All of this adds fuel to my fire of pessimism unfortunately.

Toronto hasn't been able to hold many teams under 50 per cent from the field and the thought of playing a Utah team that's already shooting such a high percentage has me seeing scores of 130 to 112 at the conclusion of tonight's game!

So how can Toronto win this game? Here are the HQ's keys to the match:

1) Knock down open shots. We know that the Raptors' defense probably isn't going to keep a lid on things and therefore to have any chance of winning this game, Toronto needs to keep up on the offensive side. Toronto's wing players have struggled with their shooting, especially from long range and if TJ Ford and Jose Calderon continue to play draw and kick, the Raps need to (in the words of Jack Armstrong) "knock down their Jimmie's."

2) Rebound the ball. Toronto got pounded on the boards Saturday night by Denver and Utah is an even better glass-cleaning team. In fact Utah leads the league in rebounding at over 45 a game. Toronto hasn't shot the ball well and if Utah gets rebounds and gets out in transition, Toronto is in for a long night. Bosh has been giving it his all but everyone needs to do a better job helping CB4 out.

3) Mehmet Okur. One of the toughest things about the Jazz is the mismatches their individual players create. Deron Williams, Carlos Boozer, even Matt Harpring can all be a handful individually. The Raptors are catching a break tonight as it looks like Andrei Kirilenko will miss the game but Mehmet Okur is the player I'm really concerned about. Okur is a great rebounder and quite athletic for his size. He's also a deadly long-range marksman and will spread Toronto's already paper-thin defence even thinner. Jose Garbajosa, an outside threat himself, may be the best matchup for Sam Mitchell, leaving Bosh to guard Carlos Boozer down low. Kris Humphries may also get some time against his former club and his hustle and grit will be a welcome addition for the Raptors off the bench.

And while those are probably the three main things we'll be watching for tonight, we'll also be vary of Utah's secret weapon off the bench, Rafael Araujo. The Brazillian Beast hasn't gotten much burn off of Utah's bench but look for Hoffa to bring his A game against his former teammates.