Tip-In: The Good, The Bad

Share All sharing options for: Tip-In: The Good, The Bad 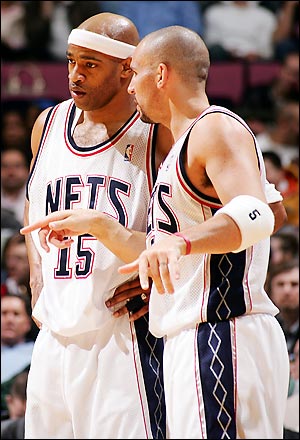 Perhaps if the Raps hadn't shot 39 per cent from the field things would have been different.

Perhaps if Chris Bosh had been healthy through the pre-season, the score would have reflected a different final outcome.

And perhaps if Toronto had held the New Jersey Nets to at least under 50 per cent shooting from the field, the Raptors would have won their season opener instead of falling 102-92 to the Nets.

There were some bright spots, like TJ Ford and Anthony Parker, both of whom had great games for the Raptors. And at times the Raptors played very well offensively showing good ball movement (particularly in the second quarter) and defensively (near the mid-point of the third quarter.)

However in the end, the team just couldn't buy a shot and even in the third quarter when they were making stops, they weren't converting on the other end of the court.

Bosh in particular looked rusty, as was expected, but at least he seemed to be fully mobile out there, if not back at a peak level of conditioning.

It's only game one, but watching it made me realize a few things:

1) Without Chris Bosh playing at an All-Star level, this team is going to have problems offensively. As well as Anthony Parker played last night doing his best Jerry Stackhouse rendition, I'm not sure I want the offense running through him. With Bosh struggling last night, Mo Pete having shooting woes and Fred Jones being slightly invisible, that's indeed what Toronto was forced to do on many a possession. This year Toronto really doesn't have any kind of "back to the basket" presence besides Bosh (even Rasho is more of a face-up jump-shooter from 12 feet and in) and you could see last night that in a half-court setting, Toronto was forced to settle for too many outside jump shots.

In addition, you may have noticed last night that the Raptors barely ran any pick-and-roll schemes. While TJ Ford shot well from the field, he's not the scoring threat Mike James was and without an effective inside game from Bosh (or Bargnani hopefully at some point) Toronto has to rely on swinging the ball in hopes of finding someone for a somewhat open shot.

2) As we touched on yesterday, the team who controlled the flow of the game did come out on top. The Nets were more effective in their style of play even beating the Raptors down the court for open layups on several occasions. And with the game in hand late in the fourth quarter, the Nets ground the pace to a halt thereby visibly reducing the effectiveness of Toronto's attack.

3) The benches. Howland has more to say on this subject below but for now I'm simply going to state that New Jersey's bench won the day outscoring Toronto's and considering players like Mikki Moore and Bostjan Nachbar were having significant impacts, it's obvious that Toronto has a ways to go in this area regardless of pre-season success.

There were a few things that really stood out to me on the opening night. The first is the fact that EVERY Raptor got minutes. That's right, all 12. A few thoughts on this.

I understand the theory, which is if you have a running team that is deep, then why not keep fresh legs out there at all times. Not everyone is as deep as this team, so in theory this seems sound. What works in theory does not necessarily work in practice. Playing 10 or more guys on a regular basis is simply not going to work in my opinion - in particular when you feel like Mitchell is just simply picking guys randomly off the bench. Perfect example of this? PJ Tucker making what can only be described as a totally random appearance in the fourth quarter. If you play ten or twelve guys, how are they going to know their roles? One of the things that great NBA teams have is a coach that clearly establishes the role of each player. We apparently have character guys, who should then feel comfortable playing a certain role for this team. The team is through its pre-season and is now playing games that matter and I still really have no sense as to what role certain players have on this team. Jones played very little point guard, Humphries and Bargnani made essentially what were token appearances, and we also saw Ford and Calderon playing together which happened rarely, if at all during the pre-season even when Ford was healthy. If this subbing patern continues I guarantee that Mitchell loses his job before you know it.

Speaking of Jones he didn't really show up tonight. That being said it is only one game but this team needs Jones to be consistent. His ability to get to the line and make plays needs to be put on display regularly. Let's see if he bounces back. If he doesn't, this team could be in hot water. Let's call a spade a spade...this team unlike say the Phoenix Suns, is not exactly full of shooters. Ford shot about as well as he will all year tonight, Calderon, albeit better, is still not a shooting threat, and guys like Jones and Graham (and even Peterson if he shoots like he did last night) are not exactly putting fear in opponents. You look at these guys and tell me you are not comfortable cheating a little on D if you're the other club? Until Parker, and especially Jones prove they are consistent threats from the outside, the half-court offence could be in trouble. This can't happen because the patented pick-and-roll from last year really isn't there now with Ford and Calderon playing the point.

One of the main reasons the Raps lost tonight's opener is that the Raps shot below 40% and the Nets shot just over 50%. Had you taken the names off the back of the players jerseys tonight I could have sworn I was watching last year's squad from a defensive standpoint. There was however a glimmer of hope. During the middle of the third quarter the Rapstors defense was much, much better. The players on the floor at the time? Parker, Jones, Ford, Peterson and Garbajosa. Between the 6:14 mark and the 2:04 mark of the quarter the Nets managed three points with these guys on the floor. Over and over Ford would double and unlike last year, guys would make the proper rotations and do so ON TIME. The defense also got a boost from Garbajosa who just plays smart defense. Unfortunately however the Raps couldn't get over the hump and their shots were not falling at the other end. Therefore although this line-up put the clamps down, numbers like 5-15 and 1-8 are not going to cut it in terms of winning games.

Finally, the Raptors had a chance in this game which says a lot considering how poorly Bosh played. He is clearly still trying to get into the groove and you can really tell that he is adjusting his shot. After Jefferson was called for a flagrant foul, CB4 went 0-2 from the line. I can't remember if that even happened last year! Hopefully the result of Bosh changing an already good shot will draw parallels to Tiger Woods when he completely remade his swing. Woods went from excellent to near perfect...but not without some bumps along the way.

- Anyone else surprised that Rasho played so little? He looked solid in his nine minutes of PT regardless of foul trouble.

- Is there anything better than the NBA and having 13 games on the slate?

- For those keeping notes at home, the Raps shot the ball 94 times. That is A LOT.

- Apparently Marty York has reported that Vince Carter is thinking that coming back to Toronto after he opts out this year may be a good idea. We think Marty York moving to New Jersey is a better idea. York is like a square wheel. Useless.