Tip-In: No Gold in Denver for Road-Weary Raps

Share All sharing options for: Tip-In: No Gold in Denver for Road-Weary Raps 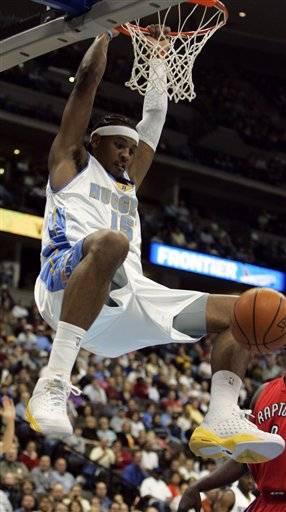 What more can you say?

The Raptors are 0-4 on their road trip and all four losses were winnable games...well...at some point.

In last night's 117-109 loss to the Nuggets, Toronto kept Denver's field goal percentage at 45 per cent, got to the free throw line almost as much as the Nuggets, had eight more assists as a team and turned the ball over only eight times to Denver's 20.

However Denver's size and work on the boards were too much as they outrebounded Toronto 58 to 37. The second chance points killed the Raptors when it mattered most and combined with Toronto's shooting woes, Denver powered through to the finish line for the win.

Carmello Anthony led the Nuggets with 34 points and contrary to the Raptors' gunners, seemed to hit every big shot he had to to preserve the win.

The Raptors did shoot a respectable 46 per cent from the field but shot a horrid 25 per cent from beyond the arc. At the free throw line Toronto was sub-par as well hitting only 19 of their 27 shots. As mentioned before, for a team that wants to drive and kick, it's imperative that the Raptors' wing players start knocking down these shots or it's going to be a long season.

After the game, Chris Bosh looked visably upset by yet another loss and appeared to be in a heated discussion with TJ Ford. Hopefully Ford wasn't the target of CB4's frustrations as he had his best game as a Raptor with 26 points and 18 assists. Ford's assist total was one off from Damon Stoudamire's franchise record of 19 and I finally saw the player who I hoped Toronto had acquired when they dealt CV Smooth. TJ consistently drove the ball to the rim, was aggressive in initiating the offense, took open mid-range jumpers when given the opportunity and one can only imagine how many assists he would have had if the Raptors had knocked down even a few more of their outside shots.

In fact you gotta feel for Bosh though through all this losing. He had another solid game with 31 points and nine rebounds and even got the touches near the game's end but once again, it was not enough. And with Utah and Cleveland looming next week, I'm not sure how much light there is at the end of the tunnel...especially considering the way Toronto has played on this trip.

But let's end this on a positive note shall we? Sure, Toronto is now 2 and 7 and tied for the second-worst record in the league, but I am finally seeing some good signs for later in the season...and I don't mean purely in the Greg Oden chase.

For one, Jose Garbajosa, who found himself in the starting lineup again for Toronto last night, also had his best game of the season with 17 points, 10 rebounds, six assists, two steals and a block while shooting 50 per cent from the field. And after doing an excellent job defensively against Lamar Odom on Friday night, he followed this up with another strong performance and looks to be a good fit to stay with the starting five.

Fred Jones had a rough night shooting the ball from long range but in the past two games has looked much more like the "take the ball to the rim and dunk on them" Jones that I thought Toronto had signed as a free agent. If he can continue to get comfortable in this slashing role and leave the outside shooting to Mo Pete and Anthony Parker, this will give Toronto a good 1-2 punch when combined with the interior play of CB4.

And finally, if TJ can play at the level that he played last night on a regular basis, that's a huge plus for this Toronto team, currently in desperate need of consistent play from its starters.

Last night it was Toronto's bench who didn't give the Raptors' much of a lift and Sam Mitchell stuck with his starters for longer chunks of time than ever before this season. Case in point, super-sub Jose Calderon played only 10 minutes in the loss. However, to get a W from the 9 and 1 Utah Jazz Monday night, the Raptors' know they'll need solid contributions from their entire team.