Share All sharing options for: Tip-In: The HQ Diary 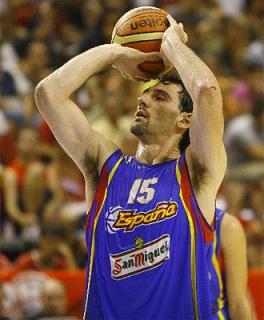 10:32: A special thanks to TSN for being late in its coverage of the game because Buffalo is beating the Penguins. Maybe TSN should just not cover ball. It’s HOCKEY that lives there right?

10:34: Oh No…it’s Mr. Canadian Sports Rod Black. His voice is like nails on a blackboard unless he is talking about curling or equestrian.

10:36: Ok now things are upside down. Rasho is now off the bench and Garbo is starting. Huh?

10:37: Apparently that change in the starting line-up is worth 2 seconds of air time…more talk about Kobe’s 81.

10:39: More discussion on the line-up change. The Garbs thing has to be a match-up thing. To keep Bosh out of foul trouble against Odom?

10:42: Jones drives, but misses, but still a good sign. It he would consistently go to the hoop he would be much more effective.

10:47: Luke Walton looking fleet of foot. He’s been solid this season. Chuck wonders how this happened.

10:49: Garbo again. Mid range is apparently the key…that’s right the same distance as the international three. I believe an HQ writer suggested Garbs would have a tough time outside the NBA arc.
10:50: Parker with his third foul. Welcome to the bench.

10:53: Kareem looks like he is a Political Science teacher more than an Hall of Famer.

10:55: TJ is playing a lot smarter right now, making the right decisions and the smart foul. It will be interesting to see how Mo Pete plays tonight. There just seems to be a sense of calm confidence.

10:57: Three minutes left. We are expecting a Bargnani appearance.

10:59: Watching the Suns-76ers on RapsTV during the adds. Just caught Jalen in a Suns jersey for the first time. What is his role on this team? Anyone?

11:06: End of the first Q. Good flow thus far. Not perfect but very few forced shots. Mitchell has also done a decent subbing job at this point. You know it is really not that tough to satisfy us. Ford has to play at a fast speed but under control, Jones has to get to the rim, Bosh needs to be Bosh, and Garbs need to play tough D and not jack from too far out. All of these things happened. One problem…the Lakers are shooting over 60%.

11:12 Kobe hits the J to start things off in the second. Sure doesn’t look like a player whose had knee surgery. Kobe so far hasn’t been a scorer, but solid with 8 points, 4 assists and 4 rebounds.

11:14 :Calderon bails the Raps out on the shot clock…beautiful scoop shot.

11:16: Kobe again through the whole team…way too easy. Kobe gets a rest luckily.

11:32: No defence tonight as the Raps and Lakers are trading baskets…Calderon doing a great job again. But Radmanovic dunking on Bosh and getting the foul? Weak

11:34: 69% shooting for the Lakers…lewd in more ways than one. Sam calls a timeout as the Raps are getting beat at their own game. Chuck comments that Andrew Bynum is a "young man"…Howland remarks that "yeah, he’s about 8 years away from being 10.

11:37: Reason number 76 why Calderon should be getting more time in our books as he blows by the entire Lakers squad for the layup. And just like that…TJ back in. No idea why considering that Toronto appeared to be close to seizing the momentum.

11:37: Rasho in as Bynum returns. I suggested prior to the tip-off to Howland that the lineup I would have gone with in this game for matchup purposes to start – Ford (as you know Sam’s not starting Calderon) Parker (on Kobe) Bosh at the 3, Garbs at the 4 to guard Odom and Nesterovic on Bynum.

11:38: Kobe. Once again…this guy had surgery? Another Jordanesque basket.

11:40: Raptors taking advantage of the Lakers turnover cutting the score to 50-45 on a nice display of Raptors passing.

11:41: Bosh keeping the Raps in this one…no defence is being played whatsoever…
20 second timeout with 9.4 left in the half…Phil Jackson draws up a great play but it doesn’t go down. Score at the half 61-53.

11:59: Jones straight to the rack again. He should never get away from that.

12:01: Garbs from mid-range again. Is there a theme here?! Stay in the range where you are comfortable!

12:04: If it was not for LA turnovers the Raps wouldn’t have a chance.

12:07: TJ is taking it to the hoop and now with the sick DISH to Jones for the cram. That guy has some of the best ups Raps fans have ever seen.

12:07: Ford again to the bucket and the Raps on a 17-8 run and now have their first lead of the ball game. You know the Laker push is coming can the Raps stay in it?

12:12: Lakers continue to turn it over. This may be the best quarter of basketball the Raps have played all year. Hopefully we didn’t jinx it.

12:12: Jones to the line again. For whatever reason Leo thinks his name is Freddy Brown. Who is Freddie Brown?

12:14: The Kobe Bryant triple double watch is on. At least they are not talking about 81.

12:17: Bosh bench ridden with fouls. More Bargnani. Can the Raps stay in it? Need some solid D.

12:18: Ford again aggressive to the hoop. Has a light gone on here? And making lay-ups? Who is this L’il Engine. Forget I said that. L’il engine is a terrible nickname.

12:24: Back and forth but at the end of the quarter the Raps are still in it with Bosh on the bench. Lakers only up by two. Chuck would like to thank people for staying up to watch. Apparently there are no Raps fans in any time zone other than the Eastern. Calling British Columbia? Rumour has it there are basketball fans out there…and maybe a guy named Nash lived there…

12:29:Bosh saddled with 4 fouls to start the final quarter…although apparently he’s not too disappointed as there’s something enjoyable on the big screen…

12:30: Beautiful passing by the Raps as we’re tied up again.

12:32: Calderon never looks at the ball and once again another beautiful dime drop by Calderon.

12:34: WHAT ELSE DO YOU WANT THIS KID TO DO??? Calderon steals the ball after some great defence, takes it to the hoop hard, gets the foul and promptly sinks both free throws.

12:34: Team Europe stepping it up, great play by Calderon, he can’t make it but Rasho tips in the miss with a well…interesting flip shot.

12:36: Raps getting some tough calls but are playing better D causing the Lakers to turn the ball over for the 18th time.

12:40: Jordan Farmar with 5 straight points including a nice crossover dribble to get to the rim.

12:43: Raps are 1 for 16 on three pointers as Fred Jones misses again from downtown. This could be the difference in this game.

12:47: And the Raps are reverting to their jump shooting ways…Fred, you gotta go to the rim.

12:50: TJ Ford is playing like Jose is going to take his job…maybe the best thing that could happen.

12:50: 1 Point game…as Bosh hits a three. He was wide open on this one so I guess you live with another jump shot…but this offense still needs to get the ball INSIDE to win this game. Lakers on the line shooting two.

12:51: Bosh hits another jumper from the elbow. Raps need a stop here. Kobe for 3…no go…maximum effort, minimum result as both Bosh and Peterson go for the board knocking it out of bounds.

12:54: TJ Ford passes to no one while Peterson almost kills himself trying to keep it in-bounds. That turnover may end it.

12:55: Lakers get the hustle playes down the stretch. Two offensive rebounds as Kwame back at the line with the Lakers holding onto a four point lead.

He misses the first.

Gotta go to Bosh here but do you keep TJ in the game?…we’d go with Jose.

12:57: Rasho in for Jones for rebounding purposes. Jones played 38 minutes in the game. Kobe steps to the line and hits both. 5 point lead for the Lakers again.
Jose in now with Ford.

12:58: Talk about shooting yourself in the foot. Bosh steps out of bounds on his three point attempt resulting in another turnover. Raptors are forced to foul Kobe again.

12:59:He hits both and Toronto tries one more desperation play as Calderon drives to the hoop but he misses the layup and the game is over.

In the end Kobe doesn’t get 81…but he does get 31 (Good call JACK!) and the Raptors once again miss open shots that would have resulted in a win.

Three things are now more obvious then ever. The first is that as much as we have talked about Calderon outplaying Ford and possibly starting him, if the two continue to push each other this can mean nothing but good things for the Raps. Second, as seen above Fred Jones need to go the hoop over and over. The preseason games where Jones went to the line almost 10 times a game seems like eons ago. Finally, Garbo. After the game Mitchell said that Garbo will also start in Denver on Saturday nigh. He needs to stay in his comfort zone for now. Take a look at his shot chart and tell us that he doesn't need to stay inside the arc.

It looks more and more likely that the Raps could go 0-5 on this road swing as a late night and back-to-back with the tail end in the Mile High City is not an easy task. After that Utah...and in case you have been living in a closet the Jazz are playing great ball and are 8-1.