Tip-In: Looking in the Mirror

Share All sharing options for: Tip-In: Looking in the Mirror 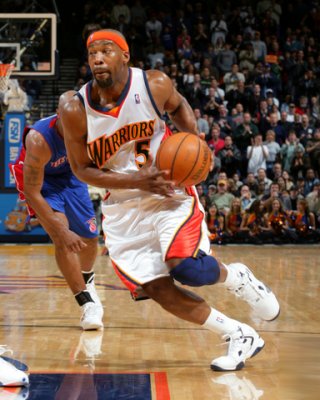 Does this game really need anything else to explain it other than those three words?

Toronto dropped its third in a row allowing Golden State to come back with a 17-2 run in the fourth quarter as the Warriors won 110-99. Leading the way for the Warriors was Baron Davis who had 22 points, including 11 in that decisive fourth period. However there were many other Warriors that made significant contributions to this win. Mike Dunleavey came off the bench to pour in 22 points and grab eight rebounds, Jason Richardson (while not yet 100 per cent) had 14 points and five boards, and Andris Biedrins, who had 14 points and 12 rebounds including a number of key ones down the stretch as he dominated rookie Andrea Bargnani. For those of you who watched the game or saw the highlights, you know that this dominance prompted a fiery rant from Chris Bosh aimed directly at the Raptors' top pick from last year's draft.

After last night's loss I really feel that Toronto doesn't have a shot at winning any of the three remaining games on this road trip. Toronto doesn't match up well with the Lakers due to the dexterity of their bigs in Odom and Walton and of course they have a certain former number 8 as well who has caused Toronto a few problems in the past. Denver is a team that has struggled at times this season but they have a lot more size than Toronto up front and may simply overpower the Raptors. And finally the Utah Jazz are perhaps playing the best basketball of anyone in the league right now.

No, Toronto has their work cut out for them. Obviously Toronto payed little attenion to our game keys yesterday as the Raptors lost last night's match based on...surprise, surprise - being unable to contain dribble penetration and turning the ball over much too often. Sure they missed a number of open looks in the fourth quarter, but their defense definitely didn't bail them out.

The Raptors perimeter defence was atrocious in the final quarter (although it hardly resembled the Great Wall of China the rest of the game) and when they weren't allowing Monta Ellis and co. to get to rim to open up perimeter shots for the Warriors gunners, they were turning the ball over. Golden State put on an offensive clinic in the final quarter back-cutting the Raptors and running defenders through multiple screens giving Nellie's players easy looks at the hoop. And Sam Mitchell's substitution of Fred Jones for Morris Peterson in the starting lineup had little effect if any. While the Sacramento game was just an awful game by Toronto, this loss was almost worse because it was there for the taking, and wasted a super-human effort by Chris Bosh.

Yes, CB4. We spend so much time talking about the poor play of his teammates that Toronto's MVP doesn't get enough praise. In spite of Toronto's poor start to the season, Bosh has been absolutely dominant. Without him, I'm not sure Toronto would win a game this year. Bosh turned in another workman like effort with 23 points and 22 rebounds while going 11 for 12 from the free-throw line. Bosh single-handedly kept Toronto in the game at times with his offensive rebounding (he had 10 in the game) and it's becoming obvious to me that he really needs some help.

We've talked this season about the need for a number two scorer to emerge and so far this hasn't been the case. I really thought that the number two scorer would essentially be a combination of players be it Morris Peterson, Anthony Parker, Fred Jones or even Andrea Bargnani. So far though the offensive production after Bosh has been inconsistent to say the least and I find myself once again wondering if we weren't better off keeping Mike James. When Toronto started to lose momentum in the fourth quarter we really had no one to go to. Bosh did get some touches but Toronto repeatedly settled for outside jump shots most of the time and even Bosh launched up a few desperation heaves of his own. Without someone to create off the dribble and get to the rim, I have a feeling there are going to be a lot of games that end like this this season.

In fact, as a final thought on this game, after watching the first few quarters I realized that the comparison to the Phoenix Suns that was promoted so much by the media all off-season was way off base. Toronto is much more like Golden State - a team that runs, has some talented players and depth when healthy, is terrible defensively, but when its shots are dropping, can scare any team in the league.

The problem, as Sam Mitchell alluded to after the game, is that when those shots aren't dropping, this team simply can't compete.