Share All sharing options for: Media Watch for November 14, 2006/Game-Day Preview vs. Warriors 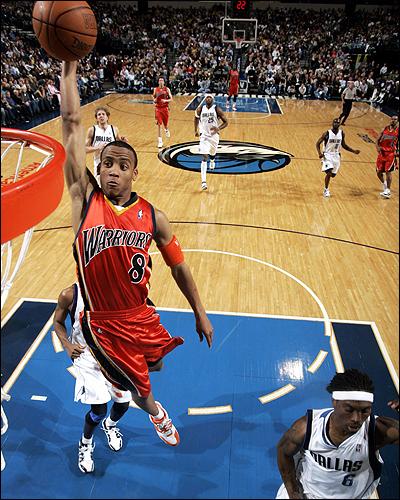 In pre-season, prior to lineups and rotations being set, here at the HQ we argued that Anthony Parker and Morris Peterson would be the starting 2 and 3's simply because a back-court of Fred Jones and TJ Ford would be too small.

Apparently Sam Mitchell is now going to challenge this theory.

With his starting five struggling to stay in games in the first quarter, Mitchell has replaced Morris Peterson with Fred Jones. Peterson will now take Jones' sixth man role and come off the bench with the second unit.

According to the Toronto Star, Mitchell is admitting that he should have made this move out of training camp but he thought that Jones' scoring and slashing ability would be best served on the second unit beside Jose Calderon.

It's definitely an interesting move by all accounts. Anthony Parker has played better defensively than Peterson so far this season and perhaps knowing that he is the "go-to" scorer in the second unit, will help Mo Pete's game. However I think the media is blowing this a little out of proportion. If I was to name the most disappointing Raptors so far my list would have Fred Jones in second behind TJ Ford with Garbajosa taking the third place on the podium. I expected Jones to be able to create more off the dribble and get to the rim with relative ease based on his quickness and athletic ability. However Jones, aside from his monster dunk in the home-opener against Milwaukee, has been fairly invinsible in my opinion and I'm just not sure that there's been that much of a difference between his play and Mo Pete's.

I'm also concerned now defensively. Both Ford and Jones are good rebounding guards for their size but opposing teams might have a field day posting both up. Ford in particular is at risk because there's no longer a 6-8 wing to rotate over and help.

So how will this impact tonight's game?

Howland thinks that unlike past games, perimeter D is the key, more so than the battle inside and I agree. Baron Davis, Jason Richardson, and now Monta Ellis can all score and get to the basket at will so it will imperative that the Raps lock-down the perimeter. While the Toronto Star is highlighting the matchup between Richardson and Parker, the ugly match-up here in our opinion is Davis vs. Ford. Parker can arguably handle J-Rich (as much as anyone can) if he plays tonight and Howland likes Jones matched-up against Ellis. There's no question that all the Raps swing men will get burn, whether it is because Mitchell is still on his "Let's pretend it's Novice Ball and Play Everyone" kick, or because the Raps are likely to get into foul trouble. But with Baron Davis, you can't play him with your hands (something Ford has had the annoying habbit of doing so far this season) and although bigger than Ford, has an explosive first step. If Baron heats up, he can shoot the lights out and knowing the Raps luck as of late, Baron will probably light the place on fire this evening.

Speaking of Ford, Howland and I both think that Mitchell should have looked his way first, rather than Mo Pete's, if he wanted to make a change to the starting line-up. The team is lacking confidence right now, and a vocal leader. ENTER CALDERON. Is there a guy on this team playing with more confidence?! The Raps, tonight in particular, are going to need shooters and one of the key reasons for this is Andres Biedrins who is suddenly becoming a one-man block party. Ford could have a tough night penetrating when this guy is hanging around the middle which could really nullify his game. Calderon has been one of the best Raptors thus far, and it would be nice to see Mitchell give him some burn with Bosh. Pick-and-roll perhaps?

As for Mo, it will be interesting to see how Mitchell plays him tonight and how Peterson responds. It is never easy to get demoted, but #24 has always been the constant professional. I expect Mo to have a solid game. On the flip side, Fred Jones, is going to have to step it up right away to prove that this was a good move. He can score from anywhere but he needs to come in and help the defense. He also cannot start off slow like he has as of late. In fact, this is another great reason why it should have been Calderon in the starting line-up and not Freddie.

Besides locking-down the perimeter, Toronto's really going to have to do a good job taking care of the basketball. Turnovers killed the Raptors Sunday night against the Kings, and Golden State, who is the sixth highest scoring team in the league, will feast off another night of sloppy Toronto play. The Warriors are currently the fifth best shooting team in the league at nearly 47.5 per cent from the floor and easy baskets in transition are a big part of this. Toronto has to get back defensively and take care of the basketball against this club who plays such a similar style to Toronto.

Finally, this game in my opinion is a make or break one for the club. Another blowout loss could torpedo the Raptors for the remainder of the road trip and really sink the club deep in the Atlantic Division standings. Right now Toronto is sitting quite low on ESPN.com's power rankings
and if the losses continue to pile up, they'll be fighting it out with the Knicks and Celtics in the NBA's basement.