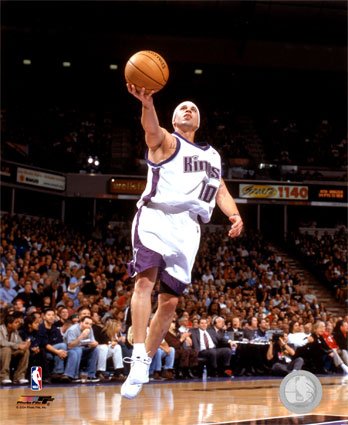 Well folks, there's no real way to sugar-coat this loss.

Toronto once again started out a game playing poor defence and letting the opposition jump to an early lead. Sure the Kings hit some ridiculous shots and just didn't seem to miss...but the Raptors added a new wrinkle to their first quarter woes yesterday evening...

Toronto simply played its sloppiest quarter of the season offensively and coupled with their already poor defence, and Sacramento's lights-out shooting, Toronto's turnovers amounted to "digging their own grave." By the end of the first quarter the Raptors had allowed Sacramento, the league's worst offence, to pour in 36 points and mount and 11-point advantage. And while at various points Toronto cut into Sacramento's lead, they simply couldn't get closer than 13 and ended up losing 107-92.

Sacramento came out guns blazing and didn't seem to miss. And when they did, the Raptors kept giving the Kings second chances allowing the Kings to rack up the score. Sam Mitchell was so frustrated that 10 minutes into the game he had played 12 different players. Yet even in his frustration, some of his subsitutions made little sense to me. With Toronto finally making some stops at the start of the fourth quarter and scoring at the other end, Mitchell pulled one of the main leaders of this charge, Jose Calderon, and replaced him with TJ Ford. Calderon had played well defensively on the previous possessions stealing the ball all the while controlling the tempo and being the shooting threat that TJ Ford simply is not at this point.

And while we're on the subject, let's talk about TJ.

I was in favour of the trade that brought him to Toronto for various reasons but I admittedly am finding it hard to cheer for him at the moment and his play tonight was simply not NBA material. Sure he had 12 points, seven assists and six rebounds but I'm finding that TJ is the type of player whose stats lie. For instance, TJ also had eight turnovers in tonight's game, did a terrible job running the offense, especially in the half-court, and didn't notch his FIRST assist until there were six minutes left in the second quarter. Put it this way...Toronto isn't going to win many games this year if its starting point guard isn't getting his first assist until nearly halftime. It's also not going to win many games if its staring point guard is throwing passes behind people, forcing shots, and being called for charges. And at some point, TJ has to address his lack of a jump shot. Not only is it negating any pick and roll options, but it's also freezing up Toronto's offence. On several occasions Ford couldn't get the ball into Chris Bosh in the post simply because his man was playing off of him guarding an entry pass to CB4. With no danger of Ford shooting, Sacramento could use this defensive scheme. In addition, on one occasion, Kris Humphries was called for "three in the key" because he had planted himself in the paint waiting to try to grab the rebound off of Ford's jump-shot...which of course never came.

Looking at the stats, Toronto shot only 41.7 per cent from the field. They had their chances, especially in the first quarter, but they missed many an open look and of course let Sacramento shoot close to 50 per cent. Sacramento actually ended up committing more turnovers than Toronto by the time the horn sounded but they also out-rebounded Toronto and got way too many easy baskets. Toronto simply looked disorgazined on both ends of the court from the tip and while credit has to go to Sacto coach Eric Musselman, who has the Kings playing defence like never before, the Raptors didn't help themselves as they appeared to have a real lack of energy, an ominous sign considering it was Game 1 of this road trip.

On a final note, I feel bad for Sam Mitchell. If this team comes back from the road trip without a win, we may very well see the beginning of the "Sam Watch." Mitchell seems to be at his wits end at times with his players and I can't really blame him. Defensively, there are still way too many breakdowns and as my compatriot Howland pointed out after the game "his vision of organized chaos looks too much like...well...chaos!"

Sure I liked the background beats tonight courtesy of Arco Arena (why can't the ACC play Gangstarr's "Skillz" or Ray Cash's "Bumpin My Music") but what I would really have liked is to have seen is a competitive game down to the end. Instead, I was left with a complete feeling of frustration...and that was after the first quarter.