Share All sharing options for: Media Watch for November 12, 2006/Game-Day Preview vs. Kings 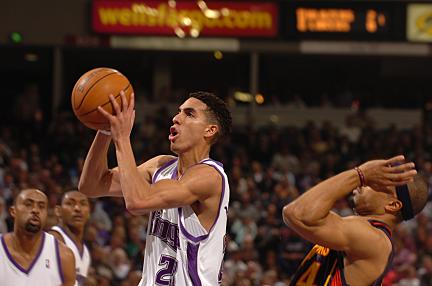 Controversy in Raptor-land five games into the season?

After another lackluster start to the game Friday night against Atlanta, the gossip folks are out in full effect with rumours of changes to the Raptors' starting lineup circling overhead like vultures. An ominous sign to kick-off the road trek Toronto is about to embark on, but the reality is that besides maybe Chris Bosh, no one in Toronto's starting lineup is untouchable.

On this side of the argument, all of us here at the HQ feel that Jose Calderon needs more minutes. He's controlled the pace of the game when he's been running the show and he doesn't take the same gambles that TJ Ford does defensively. What's most surprising is that Jose is shooting 58.6 per cent from the field as opposed to TJ Ford's 43.1 per cent. If Ford isn't pushing the tempo and cutting to the hole to find open teammates, Sam Mitchell may have him on a short leash.

Getting back to the road trip, Toronto is going to face some tough clubs on this road trip and it's going to be important to steal as many wins as they can. The trip will last for 11 days and coming back from the trip without a win would put the club at 2 and 7 and in a serious hole, even in the "Titanic Division."

And so, tonight's game against the Kings is that much more important. The Kings on paper appear to be one of the weaker clubs Toronto will face. These aren't the razzle-dazzle Kings of old as they are last in the league in scoring averaging only 91 points per game. Toronto, on the other hand, is scoring 100.6 points per game, good for ninth overall in the league. Toronto's been able to get to the free-throw line and shoot well from beyond the arc while the Kings have struggled shooting only 26 percent from beyond the arc and 39.9 percent from the field.

Just like the new version of the Hawks, Sacramento is a much-reformed team at this end of the court and are in fact now leading the league holding teams to 90.2 points per game.

Therefore key number one as always? - DEFENCE. Toronto has the advantage offensively and needs to get stops in order to take advantage of their offensive efficiency.

Key number two revolves around matchups...but more because of some of Sacramento's injury problems of the moment. Kings center Brad Miller will not be playing and point-guard Mike Bibby is still dealing with an injured thumb which has been causing turnover problems. TJ Ford has the quickness to give Bibby problems and if the Raptor guards can keep the pressure on, this could be huge in giving Toronto an opportunity to run-and-gun. The main matchup concern in this match in my opinion isn't Ron Artest. Artest can be a handful but so far this season his offence has lagged well behind his defence. No, it's gunner Kevin Martin who's having a breakthrough season. Martin is the type of quick and elusive player who gives Toronto headaches and Morris Peterson and Anthony Parker will have their work cut out for them. Just like stopping Joe Johnson was key to Friday night's game, Toronto needs to inhibit Martin to make Artest, Kenny Thomas and Shareef Abdur-Rahim the main scorers.

And finally, key number three? Yes, a broken record but I feel that it will be interior play. Without Brad Miller and with two undersized power forwards playing center, this is a team Toronto can matchup with and take advantage. In fact, Chris Bosh is leading the league in rebounds per game right now and if he can keep the crafty offensive rebounder Thomas off the boards, another strong game in this department should be in the cards.