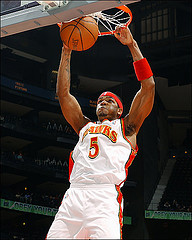 Well it was the first game of the year that I attended, and much to my dismay the Raps came up on the short end of the stick suffering a brutal home loss to the Atlanta Hawks 111-102. Why brutal you ask? Because that is their last home game before heading out west for five games against teams with a combined 16-12 record.

Although I have watched all the games on TV thus far (including the exhibitions that were put on RapsTV) it was my first time to see, in person, the various changes to the in game entertainment, the floor, and yes to finally see the new team live in action.

The first thing that stood out to me was the poor attendance. Although the official attendance was 14,680 it looked like the place was about half-full. Sure the platinum and gold seats were generally full but the reds were quite empty and the upper bowl was far from filled. I have to say I was very surprised considering it was a Friday night game and the team was .500. There are a lot of little tweaks to the in game experience but there are still some glaring issues, including, in no particular order, Herbie’s constant attempts to ruin the arena play-by-play with poorly pronounced names and use of the Spanish language, the usher’s poor job of letting people by during the action to block a patrons line of vision, and much to my dismay the unwillingness to serve beverages after the beginning of the fourth quarter. Ok…I digress. Now on to the game.

If you read the papers today there is talk of a shake up in the starting line up as Mitchell feels, and I agree, that the team has not really had a particularly good start to any game. Now I am not sure it is time to make changes, as much like my fantasy team, I don’t think there is a need to shake things up until at least 15 games into the season. By that point Mitchell will have a true sense of what he has. It was a tough first quarter to watch, don’t get me wrong, up it was not a case of the starters not executing, it was simply that the shots wouldn’t fall. There must have somewhere between 4 and 8 shots and did the old in-and-out technique. Then on the other side of the ball the Hawks, in particular Joe Johnson, were on fire. Before you could blink the Hawks were up by 15.

The bench in the second quarter played…well, ok, and they managed to keep the wheels from entirely falling off. Outside of Calderon, no-one really stood out, but the foot soldiers did their job. Now speaking of the bench a few things need to be noted. The first is Bargnani. Although quite mobile for a big man on the offensive end, he looked a step slow playing D and was picking up fouls much too quickly. Some of that blame however, has to be placed on Coach Mitchell as there were times when Bargnani was forced to guard Josh Smith. Yeah, no chance. Jones came in and provided some punch offensively and again Calderon (who is SUCH a different player than last year) kept things going in the right direction.

The second half was much different from the first as the Raps came out guns a blazing and hit their first 4 shots including a great alley-oop to CB4. The momentum was slowly shifting in the Raps favour, but the team simply couldn’t get over the hump. In fact the Raps with about 8 minutes left in the fourth made some solid stops (featuring a great CB4 block) and managed to get it within two. It was also during this period of time that a light seemed to go off in Mitchell head….double-team Johnson. With a new defensive strategy the Raps managed to get the ball out of Johnson’s hands leading to a number of jumpers from Tyrone Lue that were badly off the mark.

Then Mitchell’s new infatuation threw it all away. With much of the momentum back on the Raps side and a chance to tie the game Garbajosa threw what can only be described as a HORRENDOUS pass directly to Josh Childress who went the length of the court, took a light foul from Jones and converted on a three point play.

There were a few other times during the game when the Raps looked to make a push but the Hawks managed to bear down time and time again and got some ridiculous shooting from none other than Josh Smith who looms to truly be taking his game to the next level. Smith hit 4-7 from outside the arc, a number of them at key moments and also had an UNWORLDLY put back cram. If you did not get to see the game (because it was only on RapsTV) or more particularly this highlight sit your behind in front of a TV until you do. I swear his waist was by the rim.

As mentioned at the top it is a tough loss for the dino’s and if they want to hover around the .500 mark (which at this point looks more than adequate to even possibly win the Atlantic) they need to pull out some W’s in the next 5. We will learn a lot about the character of this team over the next 10 days. One thing is for sure though, losses like this one are damaging in the grand scheme as a team needs to protect and win on its home floor and going 2-2 is simply not good enough.

- A little more on Bargnani….the kid needs to pass. Being a black hole at this stage of the career and considering the type of offence the Raps are trying to run he needs to learn to pass.

- Calderon still needs more time. Even if it is with TJ Ford.

- Mo Pete the constant professional putting last game behind him and playing well.

- I know NBA.com has Sheldon Williams listed at 6’9" but he is no taller than Joe Johnson (6’7") when they stand side-by-side.

- Solomon Jones has some of the longest arms I have EVER seen.