Share All sharing options for: Media Watch for November 10, 2006/Game-Day Preview vs. Hawks 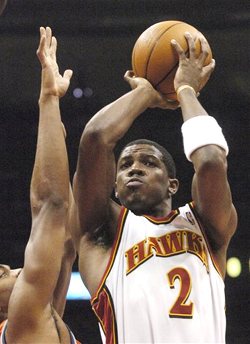 "I guarantee that the Atlanta Hawks will make the playoffs."

Those words were spoken last night on TNT by none other than the one and only Charles Barkley.

While Kenny Smith vehemently disagreed, I don't think Sir Charles is that far off the beaten path. The Hawks certainly don't look like the team that started 2 and 16 last season and in the Eastern Conference, hey, anyone has a shot at the playoffs right? Heck, after week 1, even one of our favourite reads, Bill Simmons (The Sportsguy) is declaring that the Hawks' bench bandit Matt Freije could be his favourite player of the decade!

The Hawks visit the ACC tonight for Toronto's final game of this homestand before heading out West. A win would put Toronto in good shape before tough matches in Sacramento, Golden State, Los Angeles (against the Lakers) and Denver.

So...just how to seal this win? Joe Johnson is playing like an All-Star, Josh Smith appears to have found a jump shot, Tyronn Lue has been playing out of his mind, and the collective of Zaza, Shelden and Lorenzen have been holding it down in the paint. The interesting thing is that this is the team that let Al Harrington go and is playing without Marvin Williams, who after a successful pre-season, appeared to be ready to take the next step this year. So just where is the improvement coming from?

Let's start with Joe Johnson who's been putting up Paul Pierce-esque and All-Star numbers. And the other starters, all young gunz, seem to be coming into their own. The Hawks have also added some depth including the aforementioned Wright, point guard Speedy Claxton and "diamond in the rough" find Cedric Bozeman. Bozeman went undrafted out of UCLA but just like the Clippers Quentin Ross, has been a huge defensive asset to the club and the Hawks as a whole have been much improved defensively. They are second only to the Bulls in terms of opponents scoring, holding teams to an average of 89.3 points per game. They are also second in the league in opponent field goal percentage at 41.16 per cent.

Toronto will need to employ their penetrating style to create opportunities for Toronto's gunners...the same ones who are helping Sam Mitchell realize his goal of getting up 100 shots a game. They aren't there yet, but at nearly 88 shots a game, they are leading the league in this category. If Toronto can dictate the style of play, it may indeed be their offense that wins over the Hawks newly-improved and stingy defense.

The other thing we'll be watching tonight is the individual matchups, most importantly, Joe Johnson vs. Anthony Parker/Morris Peterson. Johnson is this team's Lebron James leading the Hawks in points, assists and steals. If Parker, Peterson and even others like Joey Graham and Fred Jones can do a job on Johnson like they did on Michael Redd....advantage Raptors. TJ Ford is also going to need to bring his A game against similar players (albeit more scorers) in both Lue and Claxton. I think Andrea Bargnani really could be a wild card in this game. The Hawks really have no one to match up against him (all of their centers are under-sized) and he really could present some difficulties for Atlanta. Apparently however Bargnani is spending too much time placating the Italian media for coach Sam Mitchell so perhaps we'll see him pinned to the bench this evening.

Oh, and one more matchup? My compadre here at the HQ, Howland, was also joking that a match-up of Graham and the Hawks Josh Childress would be interesting too...call it the battle of the underperforming draft picks.

What else may decide tonight's game? - Controlling the Paint. On Wednesday night Toronto got a major work-over inside courtesy of Samuel Dalembert and Steven Hunter and while Zaza Pachulia isn't quite the athlete that these two are, he's aggressive on the glass and more of an offensive threat. Toronto's bigs need to keep Pachulia and Atlanta's other big men boxed-out and avoid them getting easy putbacks as the Raptors' guards will have their hands full with the Hawks excellent rebounding wing-men. Rebounding will also lead to transition baskets and enable Toronto to "push" the pace, something coach Sam Mitchell has been trying to hammer into his players.

Finally...key number three? Surprise, surprise, it's the play of Toronto's bench. Toronto showed in their win Wednesday night that their bench is going to have to bail them out of games this season and have the ability to do so. While Atlanta's bench has been shored up, this is one area where Toronto appears to have a distinct advantage. As long as the starters can keep the Raptors in the game, Toronto's deep bench should be able to wear the Hawks down.