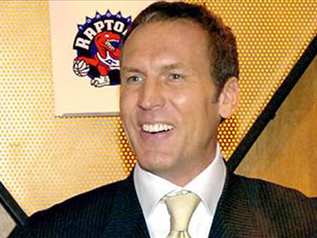 The Raps went 7-1 in said pre-season but now we find out just what this team is made of. Not to mention we find out just how devious the NBA schedule-makers are as the Raps open their season on the road against former Rap, Vince Carter, and his Nets tonight and then play another ex-Raptor, Charlie Villanueva and his Milwaukee Bucks, at home here on Friday.

So what to expect from tonight's season-opener for Toronto? Well, as will be our tradition all season, the HQ will be looking at three key things in tonight's game.

1) Chris Bosh's health. We fear this will be an ongoing situation throughout the year but for this game in particular we're curious to see how Bosh looks in terms of his mobility and simply how "rusty" he is. Sure this club has more depth and talent this year than last...but no one's pulling any punches...as Bosh goes, so do the Raps.

2) Bench play. This goes for both clubs. While the Nets probably have one of the top five starting lineups in the league, their bench, especially now due to injuries, is hardly a powerhouse. In fact with various players still shaking off rust and getting their legs, this game could very well be decided by whoever's bench comes out on top.

3) Game flow. The Raptors want to get out and run. They also want to prevent New Jersey from doing the same thing. Both Jason Kidd and TJ Ford will be attempting to push the tempo and get their wingmen flying to the hoop and besides bench play, we have a feeling that whoever controls the game tempo will be on the winning side when the game clock runs out.

Speaking of Ford, Raptor fans will be anxious to see how Colangelo's controversial off-season acquisition fares in the regular season especially considering the Raptors have just locked him into a new long-term deal. We'll be discussing the pros and cons of this deal at some point in the next few days but for now we'll let TJ's play in tonight's opener start the conversation.

In addition to the extension granted to TJ Ford, the Raps also exercised their one-year option on Kris Humphries. Humphries was one of the best players for Toronto in the pre-season and coach Sam Mitchell appears to be quite pleased to have both Kris and TJ locked up.

Our new poll today asks how many games Raptor fans believe the team will win. We're sticking to 37/38 wins but what does the media think?

At ESPN.com, their first power-rankings of the season have the Raptors placed at a respectable 21st spot. How do we feel about this? Well pretty good as it would put the Raptors hovering around Milwaukee and Indiana for the eighth and final playoff spot in the East...about what we expect. The rest of the ESPN.com crew? Well, they have the Raps finishing anywhere from fifth in their division and thirteenth overall in the conference to second in their division and seventh in the conference.

Over at CNNSI.com some view the Raptors as a surprise team (see Chris Ekstrand and Jack McCallum's season takes) but in Marty Burns' power rankings, he's got the Raptors seeded all the way down to the 28th spot. We have to disagree with him here as barring injuries we just don't see the Raps finishing below Boston or Philly record-wise.

So while CNNSI appears to be down on the revamped Raptors, theScore.ca certainly is not. In fact, in their NBA season primer, they've picked the Raps to win the Atlantic division, finishing ahead of the Nets!! The interesting thing is that considering the other teams in the Atlantic, that's not even outside the realm of possibility as the Nets really are one "jumper's knee" away from being a very mediocre club on paper.

Similarly, sportsnet.ca believes that while the Raptors won't win the Atlantic division, New Jersey is precariously in that spot, they will be in the running in what they see as a really wide-open division.

Finally, on a local note, check out our own Raptors season preview on the Detroit Pistons Today blog as part of their Opening Day Fiasco. And once again this year we participated in Chris Young of the Toronto Star's, online NBA roundtable, where we shared our thoughts on the upcoming season with other local bloggers touching on everything from the NBA Champ to the most overrated player...