Share All sharing options for: Tip-In: Bulls Have Raptors Number 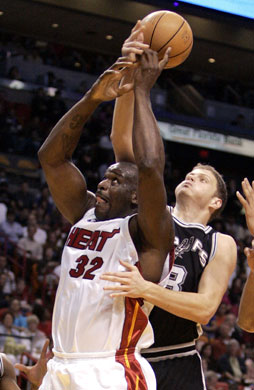 And that's a wrap.

The 06-07 Raptors and they have finished up what has felt like an eternally long pre-season was a stellar 7-1 record. Nothing to be embarrassed of, but nothing to get too excited over. One thing is for sure though, it was an interesting one.

Last nights loss against the Bulls was very much an eye opener for this writer and it should be for the Raps as well. There were a few things that jumped out at me last night, none more so than the drastic difference in the points in the paint where the Bulls out scored the Raps 46-18. The main reason for this huge difference? Well first off Ben Gordon. WOW. The former UCONN product was awesome and has really developed his game, going hard to the hoop and drawing many a foul. Getting points in the paint is the beginning of the trickle down theory at work. Here is what I mean. Points in the paint is really a reflection of easier, if not higher percentage shots. Give me 10 lay-ups I will make 9. Give me 10 shots from the line I can hit 6-7 of them. From three? 4-5. From NBA three? Hmmmm.....think Milt Palacio. As a result, if the Bulls outscored the Raps in the paint they should have shot a higher field goal percentage. Well they did. 49.4 - 40.8. This is a substantial difference. The second place where points in the paint helps is in the foul category. There is obviously a much higher chance of getting hacked in the key then when drifting outside. The Bulls did have more free-throws than the Raps but not by a drastic amount 39-34. Nevertheless, these are generally the two main consequences of being dominated in the paint and when you add them up I am sure the team jacking from the outside will lose more often then not.

The second thing that jumped out at me was the number of fouls, and lack of quality defense played last night. For a team entering the regular season supposedly groomed to run and be well conditioned, they looked a little sluggish, and this was very apparent in their defense. Too many times the Bulls were able to snag the rebound and blast the ball up the court for a wide open cram as the Raps were still trying to get back. The teams ability to play defense with their feet was also discouraging. Many times Raps were beaten off the bounce or to the imaginary "spot". No-one is asking guys to lock down someone like Ben Gordon when he is in the "Zone" but this was the case all over the floor. This was really the first pre-season game when I was discouraged by the defense, but it was also the first game where the offense just seemed a little off. Effective at times, no doubt, but there just seemed to be something missing last night. Are the two things correlated? I hope not, as there will be nights when the Raps shots are not dropping and the only way they are going to secure a W is by playing tough D.

Speaking of tough D, or at least tough fouls, here's to Rasho. We have not talked about him much this pre-season and there are questions at this point as to how much he will contribute, but he will do one thing. He will foul and he will foul hard. There were many times last year that someone would have a clean path to the hoop and guys like Hoffa would give a weak foul, many times resulting in a three-point play. Rasho is clearly not going to have any of that. There were a couple of times last night when the big man put guys down and dropped the lumber. Loved it. Guys need to think twice before they come into the paint and that is one sure way to do it. Rasho can hopefully bring some intensity to the Raps front-court from a defensive stand-point.

Intensity is something that the Raps are going to have to find between now and the season opener in New Jersey. It is disappointing that the team lost last night to the Bulls. The Bulls have owned this team the past few years and it would have been a huge confidence boost to enter the regular season 8-0. Unfortunately it is going to be the game in the Meadowlands when we see how some of these guys bounce back after a loss. For guys like Calderon and Garbajosa that was their first loss in a LONG TIME. I much would have preferred to see them lose a game earlier in the pre-season and then have the ability to rebound in a game that was not part of the "82". You know Kidd, Carter, RJ and then bunch (including Marcus Williams who continues to look really good) will be ready to play.

Oh and speaking of Vince, a special thanks to RaptorsTV who decided that showing the top ten plays of last season immediately after a Raps loss. I love highlights as much as the rest of you but knowing the Raps lost, and that they face NJ next was it really necessary to have THREE Vince Carter highlights including the number one play of the year? I realize that the Raps post-game crew were not ready to discuss the game (see not having mic's ready) but could they not have talked for the 5 minutes up to the top of the hour? That was embarrassing and whoever is doing the programming needs to pick up a classic Beastie Boys album and take the title to heart...Check Your Head.

In the end, and I hate to write this....this game really reminded me of last years squad. Too many fouls and lack of defense.

- If you thought Boston's commentators were bad, then try the Bulls. Dear God my ears.

- Get used to it....Bargs is going to have nights like this. But damn he has a quick trigger. He's like an automatic weapon. Fire, fire, fire.

- Is anyone else worried about the lack of chemistry Ford is going to have with this starting unit seeing how he has not played in a while and did look so good when he did? I am saying out loud now (and will have more to say on this soon) what I have been thinking since the World Championships....Calderon should be the starting PG on this team. At least until Ford proves that it should be otherwise.

- Jones did not look comfortable after his wrist injury. If this team loses him for any amount of time that second unit is really going to lose some of its effectiveness.

- Holy Humphries! That dribble and cram for the dunk made the trade for Hoffa a good one there alone. Humphries could never play another minute and that play made the deal COMPLETELY worth while.

- Oh, looking for a new Raptors screen saver.....our friends at HoopsAddict and Need4Sheed bring you this.

Oh and one more thing, and I have never been one for cryptic talk....but it's coming. The HQ is about to go to the next level. Real soon.